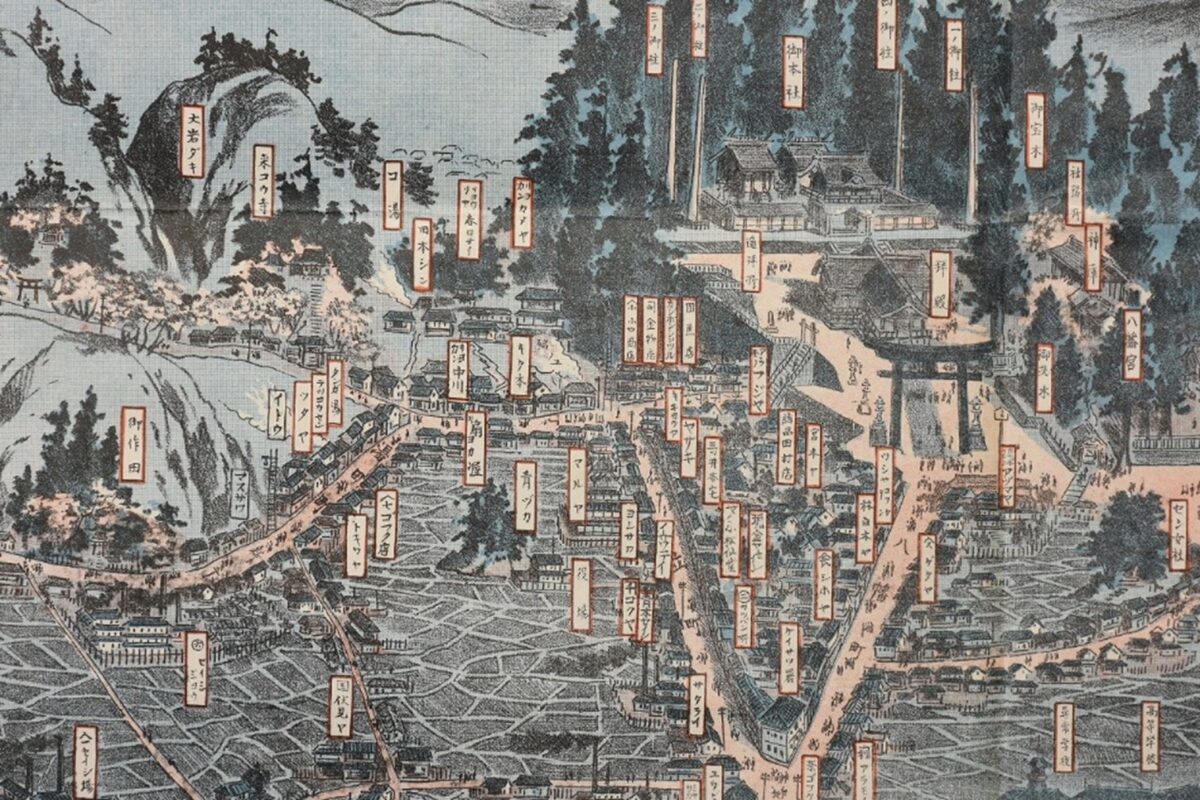 Shimosuwa’s history as a post town ( a type of rest stop during the Edo Period (1603 – 1868) ) and transportation hub spans nearly 300 years, its prosperity owed to the town’s location along the Nakasendo and Koshu Kaido Highways. The two roads intersected at the gate of Suwa Taisha Shimosha, one of the oldest shrines in Japan. Additionally, while there were 69 post stations along the Nakasendo Highway that connected Edo (modern day Tokyo) and Kyoto, Shimosuwa was the only one of those towns with natural hot springs. Thus, many weary travelers rested in the lively town’s waters to cure their exhaustion.

The remnants of Shimosuwa’s time as a post town can still be seen today in the structures that stand alongside the Nakasendo Road that runs through town. We’ll be introducing some inns that still retain that nostalgic “post town feel”, along with some valuable materials that have been passed down to the inns.

Tekkosen Honkan still maintains the look and feel of post town-era Shimosuwa at its location along the Nakasendo Highway that connects two of the towns most famous shrines, Harumiya and Akimiya of the Suwa Taisha Shimosha. 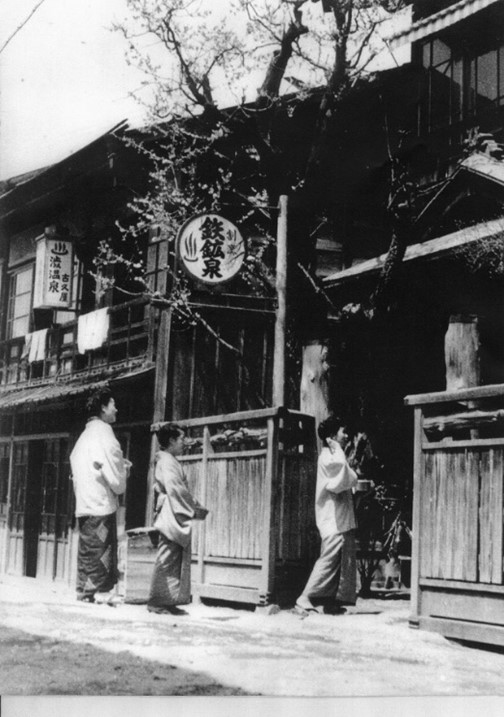 Originally the building was opened as a restaurant that specialized in catering, but it later developed into a hatago( a ryokan or an inn) called Tsutaya. A former owner then took over the shop again and founded Tekkosen Honkan in 1904. The current building was originally built by a shrine carpenter in the Taisho Period (1912–1926) but it has since taken on many forms over the years through different expansions and renovations to become the structure it is today. 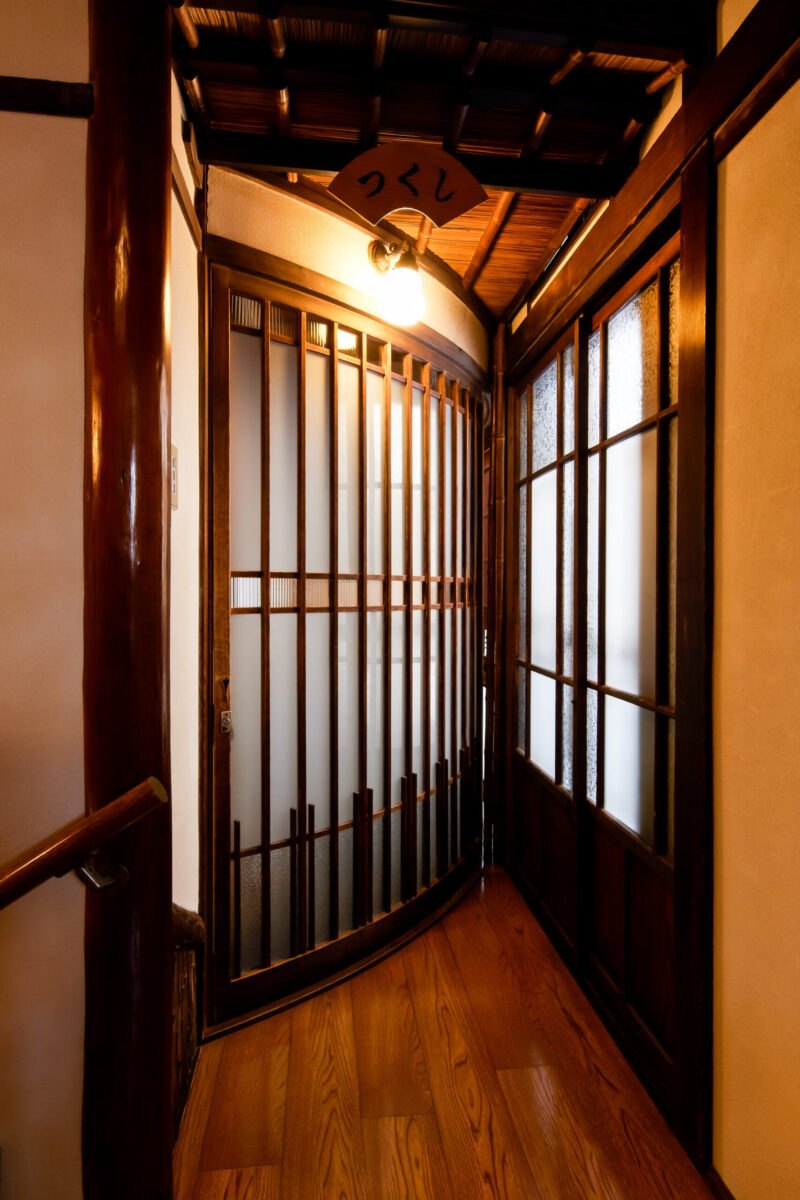 The carvings inside were crafted by artisans of the Tatekawa school, the same shrine carpenters responsible for Akimiya Shrine. Within the building, visitors encounter unique sliding doors with gentle arcs. Restorations or repairs to these are no longer possible since the special crafting techniques used have been lost to time. One experiences history engraved into the very building itself.

This legendary inn was founded in 1688 and is located just opposite the honjin (an inn used for high-ranking officials in the past) at the intersection of the Koshu Kaido and Nakasendo Highways. Normal travelers could also use the location as a wakihonjin* hatago at the time.

*Wakihonjin: Any of the inns that make up the main honjin. The honjin itself was only for high-ranking officials, while the wakihonjin could be used by everyday travelers as well. 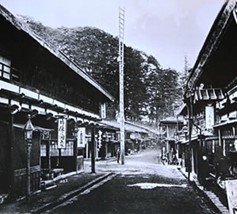 Straight in the back is Akimiya, and a fire lookout tower stands at the intersection of the Nakasendo and the Koshu Kaido. (Image taken from Adolfo Farsari’s ‘Japan Photo Album’. Photo courtesy: On-yado Maruya) 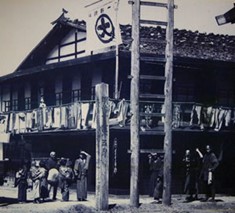 Maruya’s roof in 1889 was called a shingled stone roof. Chestnut wood was cut very finely before being topped with round stones and Teppeiseki (a kind of igneous rock indigenous to Suwa region). (Image credit: P. Roel. Photo courtesy: On-yado Maruya)

Hironobu Furihata, a pioneer in the field of restoring old family residences, carefully studied the architecture of hatago in Shimosuwa from the late Edo Period (19th c.) and restored the current building in 1993. 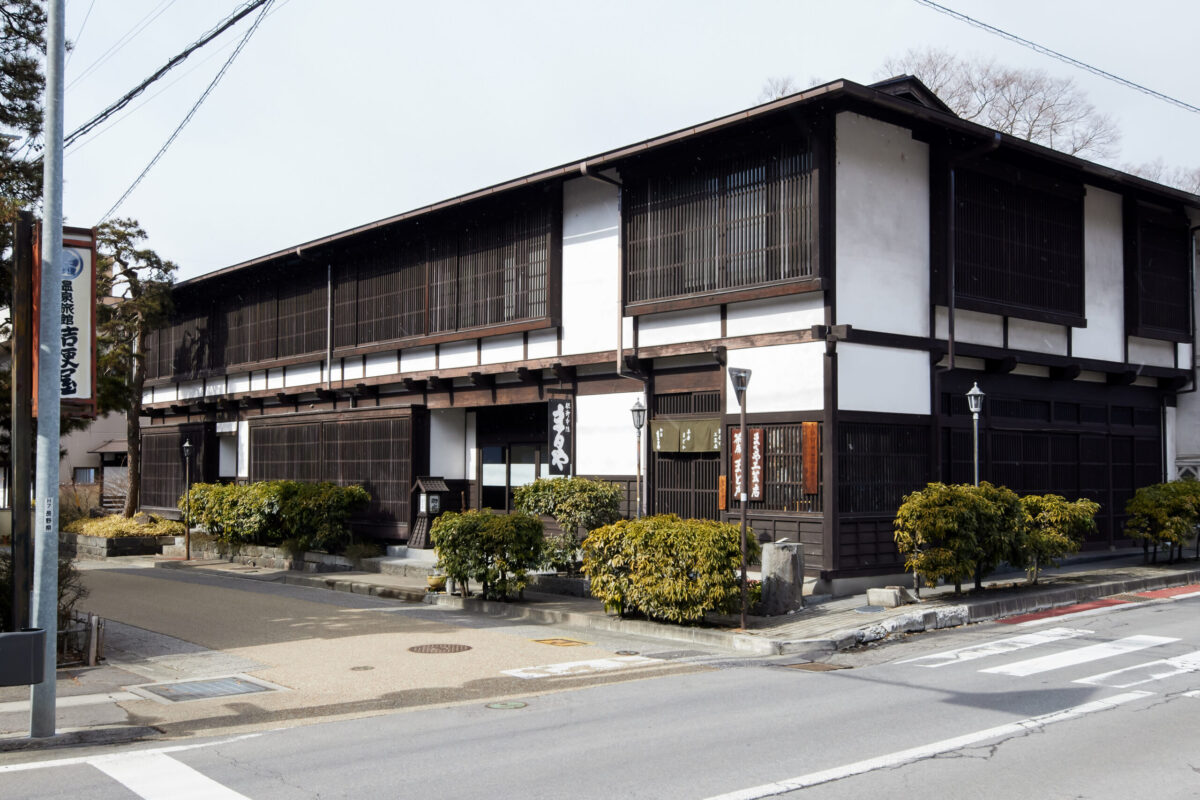 He reused as many materials as possible in the restoration, such as the original beams. The building is composed entirely of wood and plastered walls. These materials help maintain the original historical feeling of the Edo period. 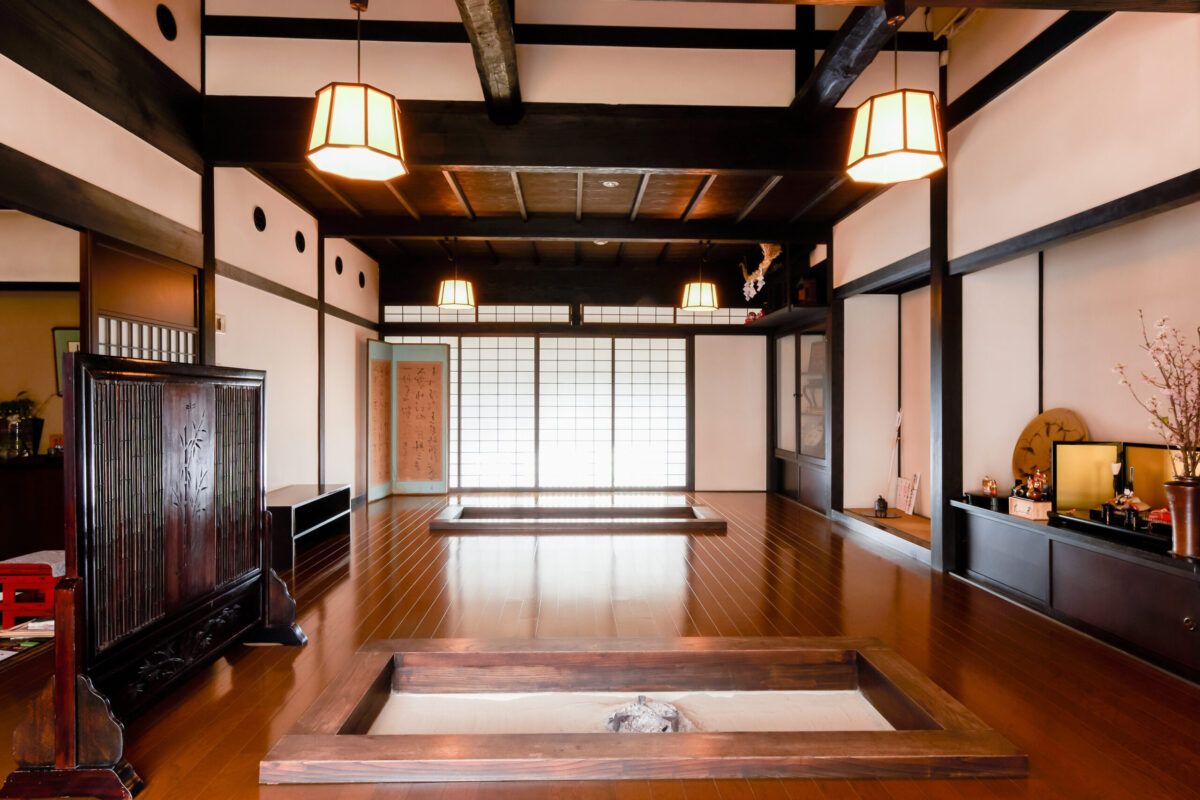 Calligraphy by Hekigoto Kawahigashi, one of the inn’s regular customers, greets customers as they enter the building along with valuable photographs showcasing the look and feel of the Meiji Period. Guests can enjoy eating from original tableware and more than 300 year old lacquerware. Take a step back in time at this traditional inn.

Another inn with a long-established history, Kikyoya was founded in 1690 and has been in business at the intersection of the Nakasendo and Koshu Kaido for over 300 years. 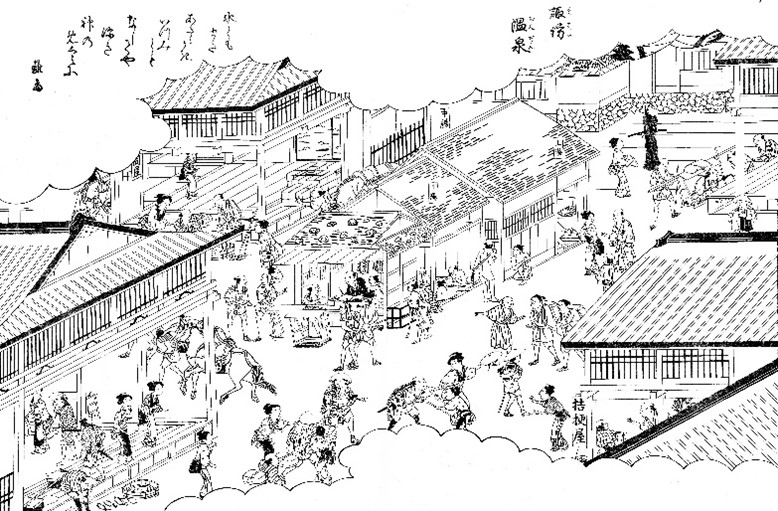 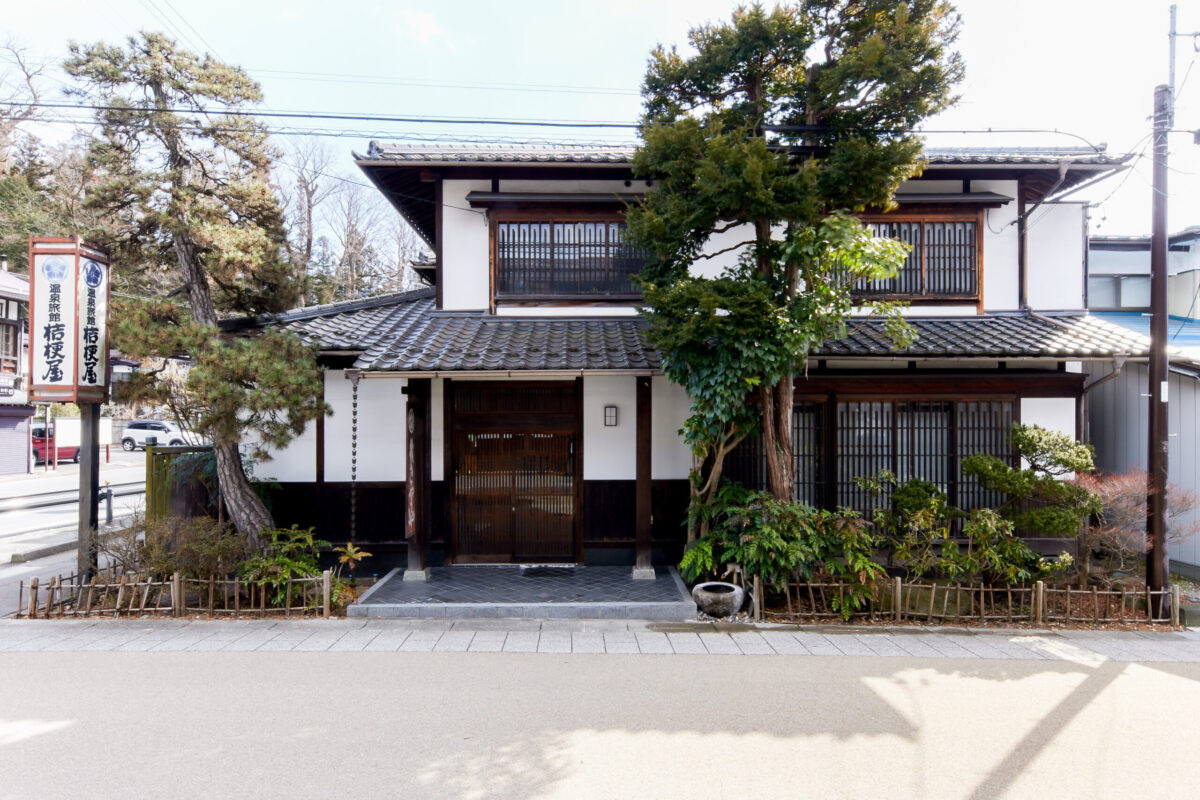 The current building was designed and rebuilt by Hironobu Furihata, just like On-yado Maruya. This building was especially adored by those who appreciated literature and other fine arts. 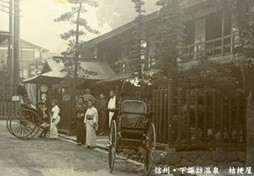 Beyond many visitors from overseas, it had many culturally notable visitors of the time including famous authors, ukiyo-e (Japanese woodblock prints) masters, poets and nobility. 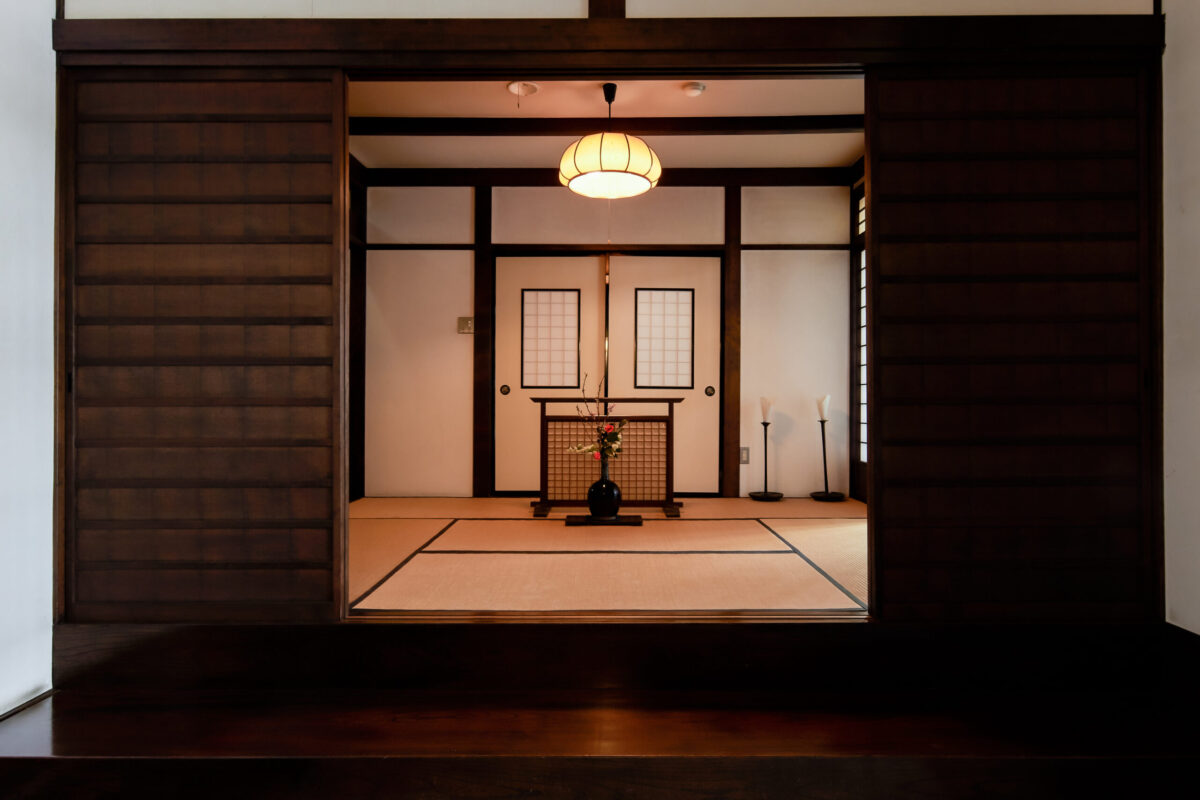 The energetic proprietress of the inn is passionate in her efforts to preserve the town's history and is always willing to share a story about Shimosuwa. One can eat like royalty through meals she recreates that were once served to a famous princess who visited the inn. There are many relics of the past at the inn, each with their own fascinating story. Why not ask the proprietress to tell you one of them?

Minatoya was established in the middle of the Edo period and lies at the entrance to the Nakasendo Highway just beyond its intersection with the Koshu Kaido Highway. Its current building was the first in the area to have been renovated by Hironobu Furihata. 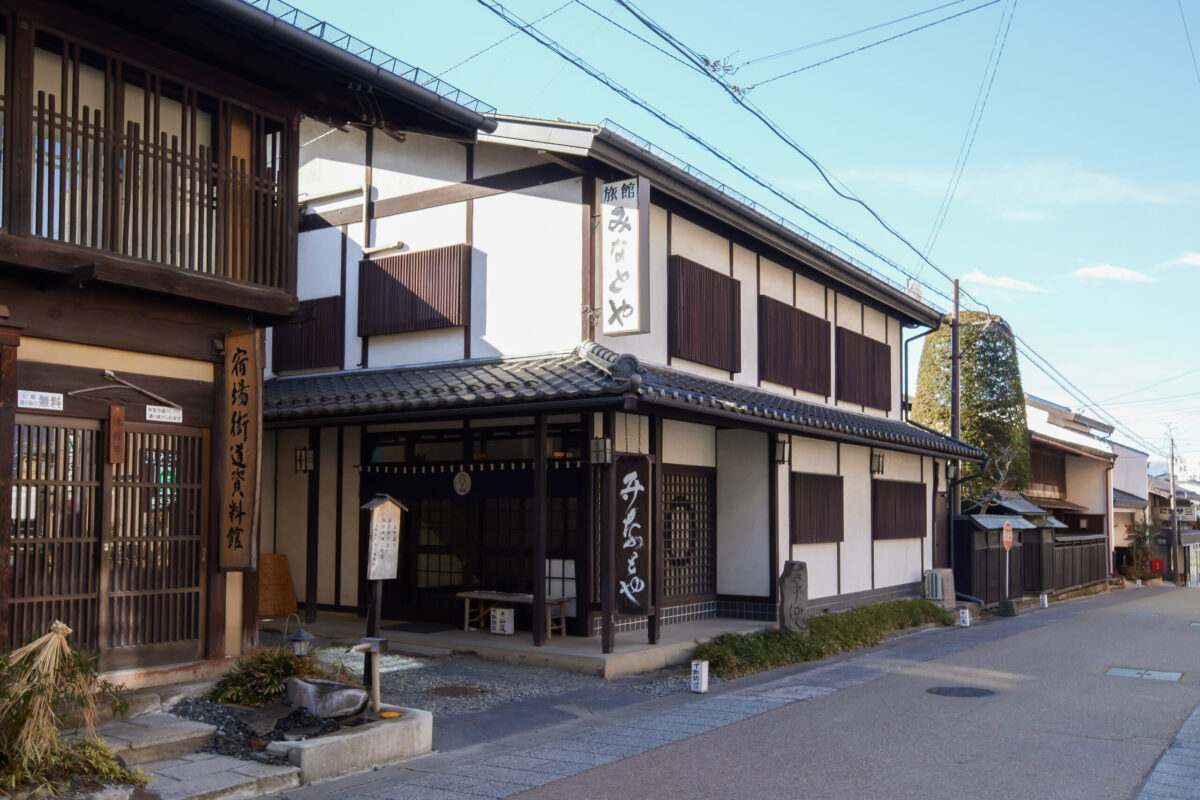 Minatoya’s baths are so renowned that they were even featured in LIFE magazine. 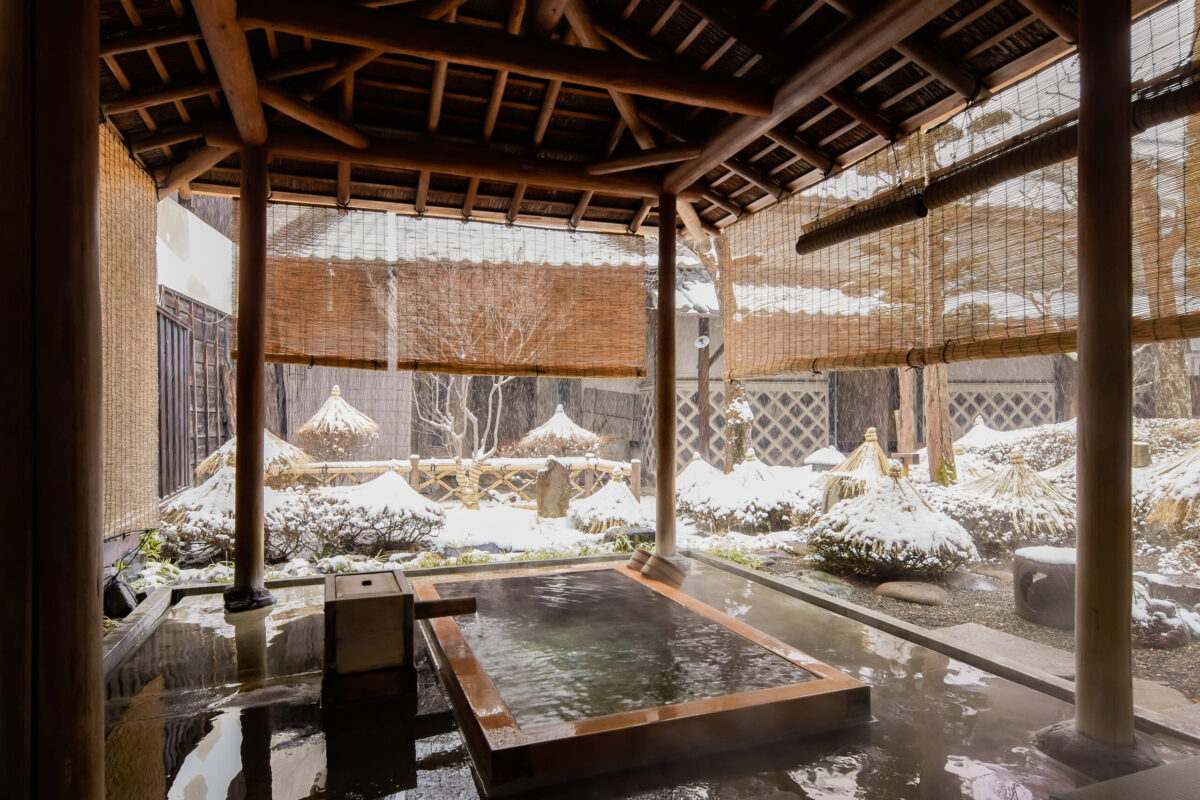 Additionally, the building took on the role of a salon of sorts whose frequent patrons included world-famous artists such as Taro Okamoto, Jiro Shirasu and his wife Masako, Rokusuke Ei, and others with refined artistic and literary tastes. 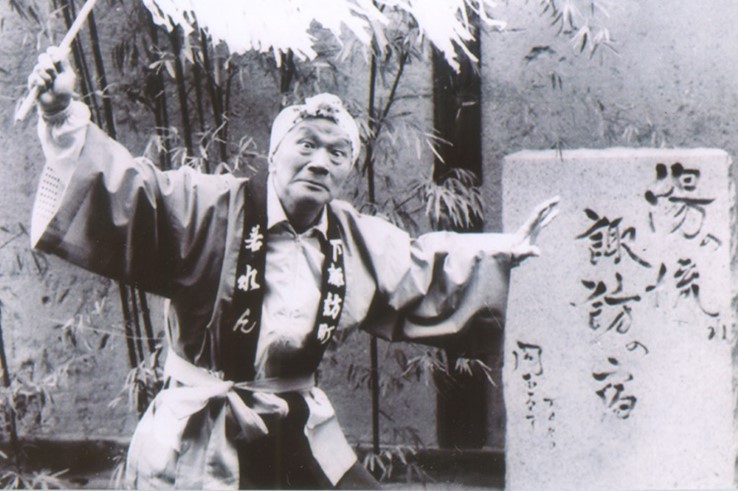 One can read stories about these famous guests on the inn’s website. One such tale tells the tale of the origin of the small white stones that cover the bottom of the inn’s hot spring baths. When artist Taro Okamoto bathed there, boards used to cover the bottom of the tub became dislodged and floated up to the surface. For a moment he thought without them on the bottom he might drown and he cried out. However, he quickly discovered stones laying underneath where the planks were.. It seems that this incident is why white gravel was spread in the bathtubs here. 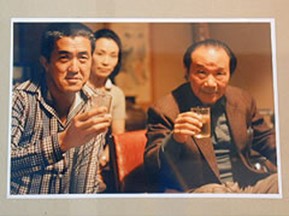 This inn has lived together with literary artists who lived through periods of turbulence in Japan’s past.

Shimosuwa is a town full of historical ryokans where travelers can heal their bodies and minds. Take a chance to stop and stay in the town and get a taste of its long history.