Shimosuwa, Town of Hot Springs
– The Legend of Wata no Yu-

The Nakasendo and Koshu Kaido Highways were two of the five major highways in the Edo period (1603-1868). Where these highways meet sits Wata no Yu, the origin spring of Shimosuwa Hot Springs. It is said that Wata no Yu was created by Yasakatome no Kami, Suwa Taisha Shrine’s goddess.

Long Ago, in the Age of Gods

This story is about a time when this land was ruled by Takeminakata no Kami and Yasakatome no Kami, both of whom appear in the myth of Kuniyuzuri, or transfer of the land, in the Kojiki (records of ancient matters). 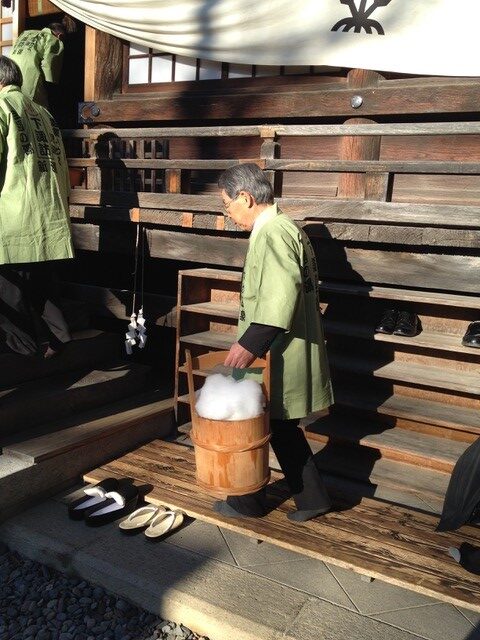 One day, a disagreement arose between the goddess Yasakatome no Kami and the god Takeminakata no Kami. In response, Yasakatome no Kami decided to take up residence at Shimosha Shrine on the opposite shore of Lake Suwa. The goddess turned the hot water which she used every day for her makeup into a sphere, wrapped it in cotton, and took it with her. While making her way across the lake in a small boat, the spheres of hot water spilled out from the cotton into the lake, thus giving rise to a hot spring within the lake. 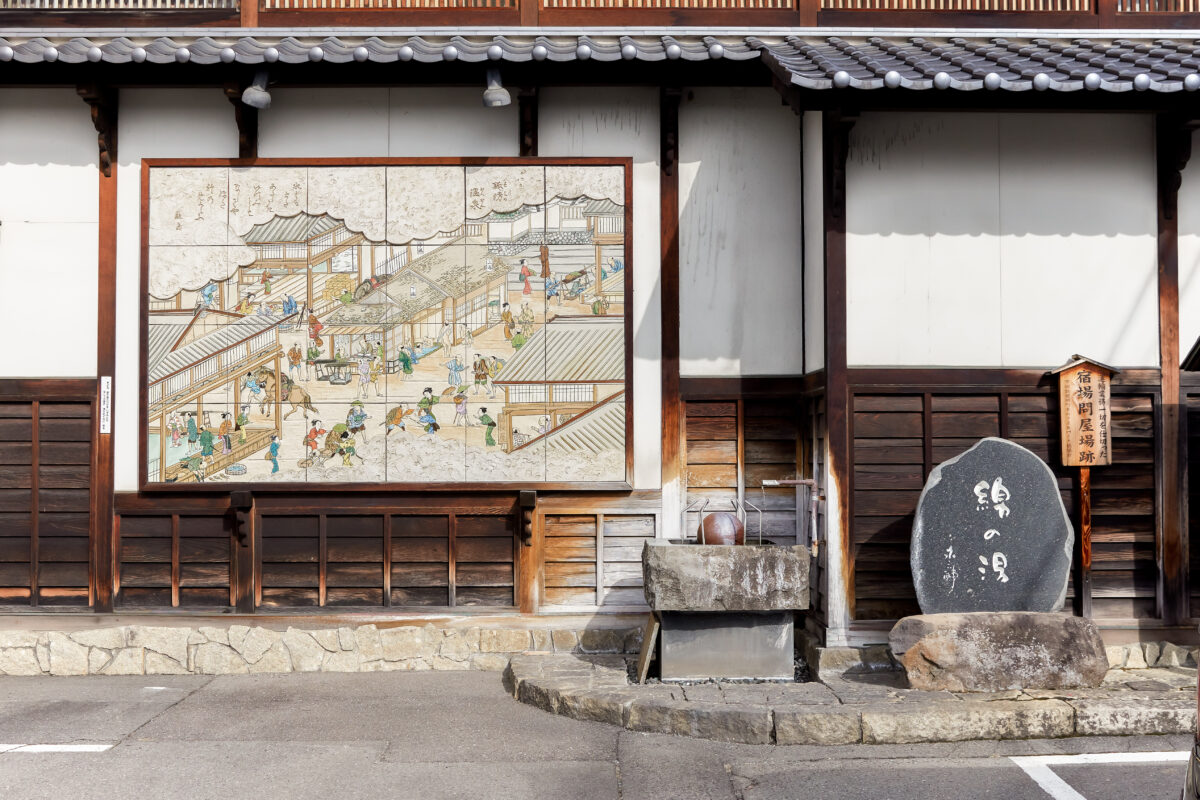 Just before arriving at Akimiya, she left the cotton spheres of hot water in various locations. Strangely, a hot spring soon bubbled and boiled up where she happened to leave her cotton! This myth is the origin of Shimosha Akimiya’s Wata no Yu. Since the water from this spring was used by a goddess, it is said that the spring will soon produce mud instead of water should anyone with an impure heart attempt to bathe in it. This spring of purity and impurity is one of the Seven Mysteries of Shimosha. 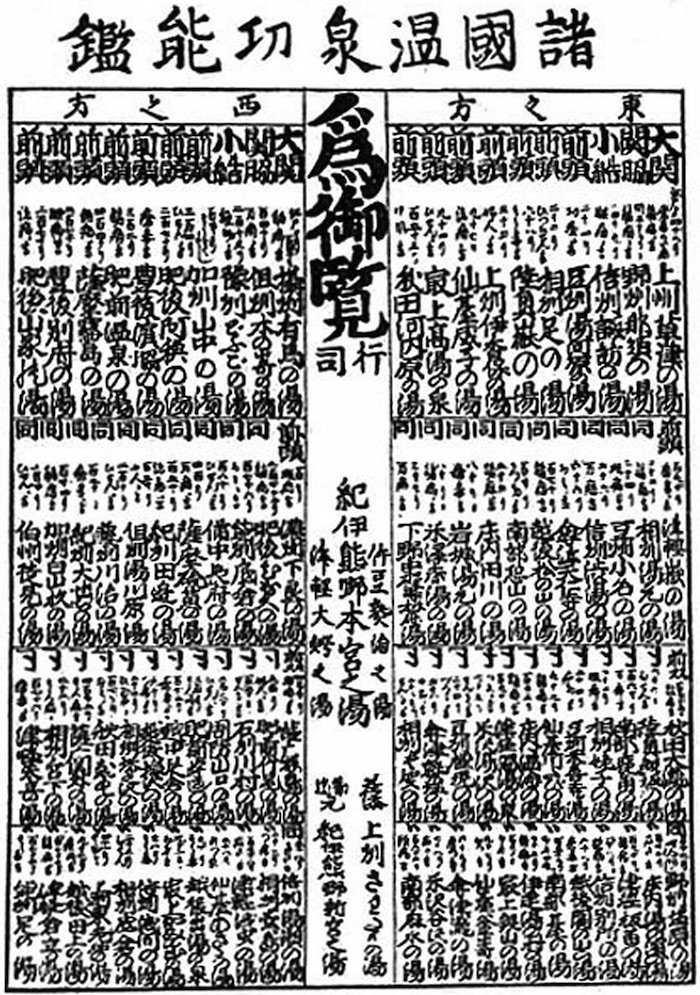 Hot spring of Shimosuwa ranked in the "Shokoku Onsen Kounou Kagami" book that ranked the hot springs of Japan at the time.

The legendary Wata no Yu soon became well-known in the Edo period. As a hot spring welled forth at the intersection of the Koshu Kaido and Nakasendo Highways (that were among five major highways built in the Edo period), many travelers stopped to rest and recuperate here. Soon, the spring’s popularity and good reputation spread via word of mouth, so much so that they were even written about in a book that ranked the hot springs of Japan at the time. 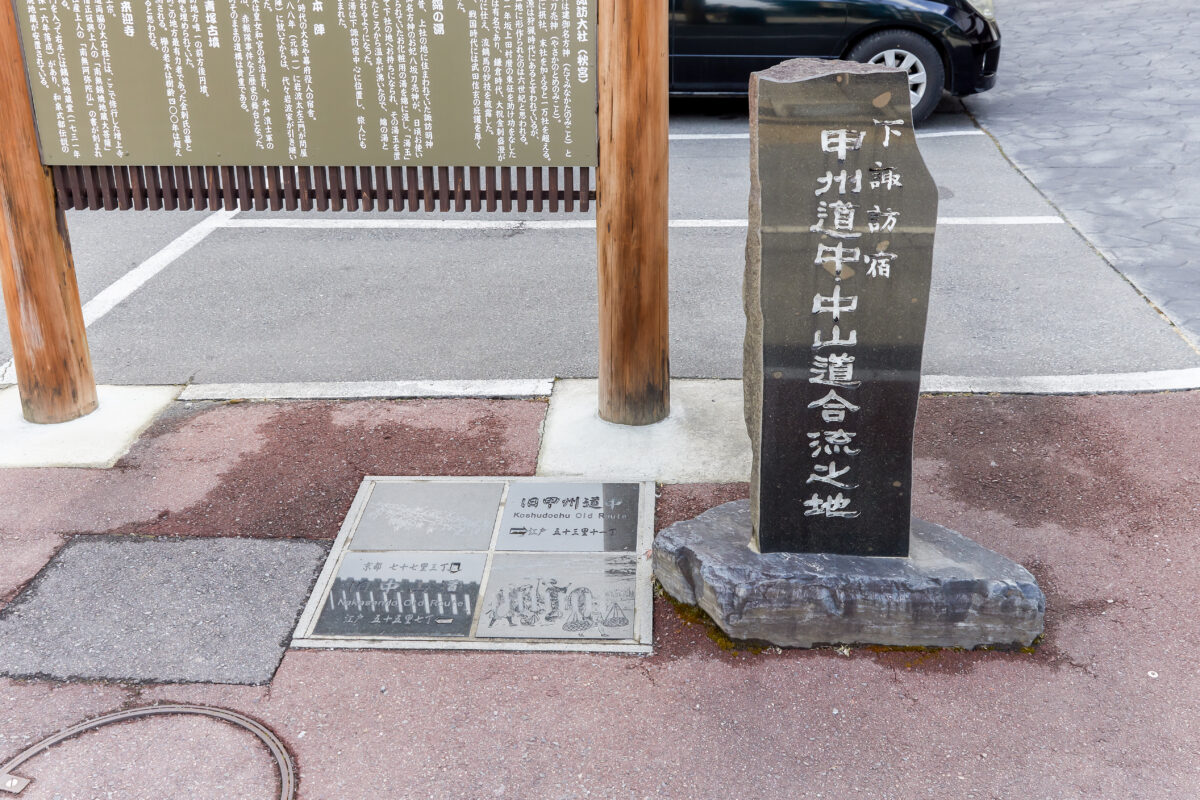 At the time, the Nakasendo Highway had land passes but not rivers (the Edo Shogunate purposely avoided building bridges on large rivers on highways, such as the Oikawa River on the Tokaido Highway, so as to prevent enemy attacks. Any battle over a bridgeless river would certainly come to a stalemate, and the travel cost of such a campaign for an enemy would be extreme). Thus, the Nakasendo Highway was often used by high-ranking officials and those who would marry a shogun along with their retinue riding in koshi-ire*. As the people in the Edo period lacked technology for excavation or digging, Shimosuwa was the only station among the sixty-nine post stations along the Nakasendo Highway where they could enjoy natural hot springs. Whether the travelers were headed for Kyoto or Edo (modern-day Tokyo), or they had already crossed or were about to attempt crossing the difficult Wada Pass, Shimosuwa’s hot springs offered a place to rest and relax. In this way, Shimosuwa and its hot springs prospered.

Besides Wata no Yu, two other hot springs in Shimosuwa came to fame in the Edo period. One of these springs is Koyu, a hot spring famous for its fertility effects. In the Edo period, a samurai from the Takashima Domain wrote in his book Suwa Kanoko about the spring’s effects: “It unwinds the mind, invigorates the blood and urges pregnancy.” Another hot spring, Tanga no Yu, is said to have been entered by a monk from a Zen Buddhist temple founded in the Kamakura period. These two, along with Wata no Yu, were well known among the people in the Edo period as Suwa’s three famous hot springs. 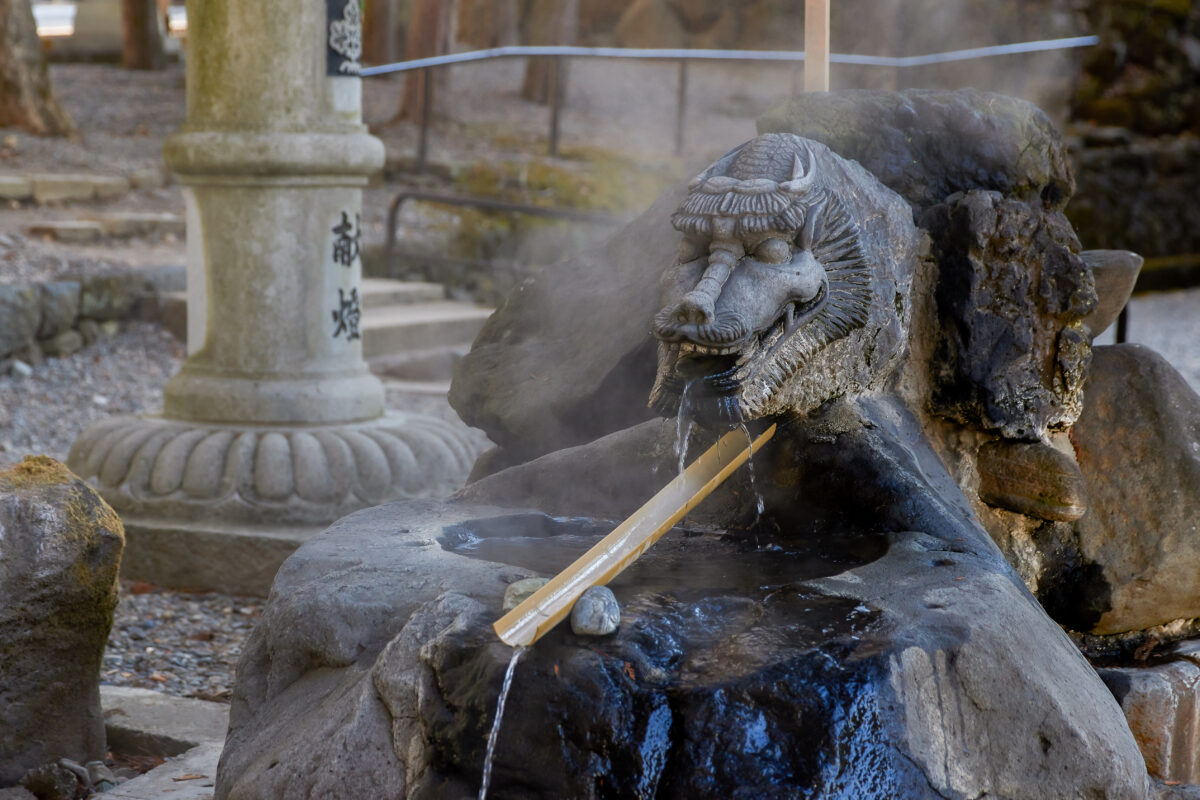 On a side note, within the ground of Shimosha Akimiya Shrine, there is a Chozuya (a purification fountain at a shrine for washing your hands and rinsing your mouth) filled with hot spring water, which is rare throughout Japan. This pavilion is called Goshinto. The spring’s outlet is shaped in the mouth of a dragon and is named after the legend concerning Takeminakata no Kami’s transformation into a dragon. The water it produces may be too hot to be a hot spring.

The mythical world of the Kojiki lives on in Suwa’s hot springs. As the warm, healing waters refresh your mind and mend your body, think of the spring water gifted by the gods. It will make you feel as if you are being purified naturally.

– Foot note – (Source: Kojien Dictionary)
*Koshi-ire: One of Japan’s traditional wedding ceremony traditions where a bride’s family would ride in a portable shrine.

A representative of the hot spring ryokan Gingetsu. Despite her age, she is known as the “young proprietress” because the old proprietress is still active. She is fond of history, books, kimono, and of course hot springs. This year, she is aiming to add a library to her ryokan using the books from her private book collection.