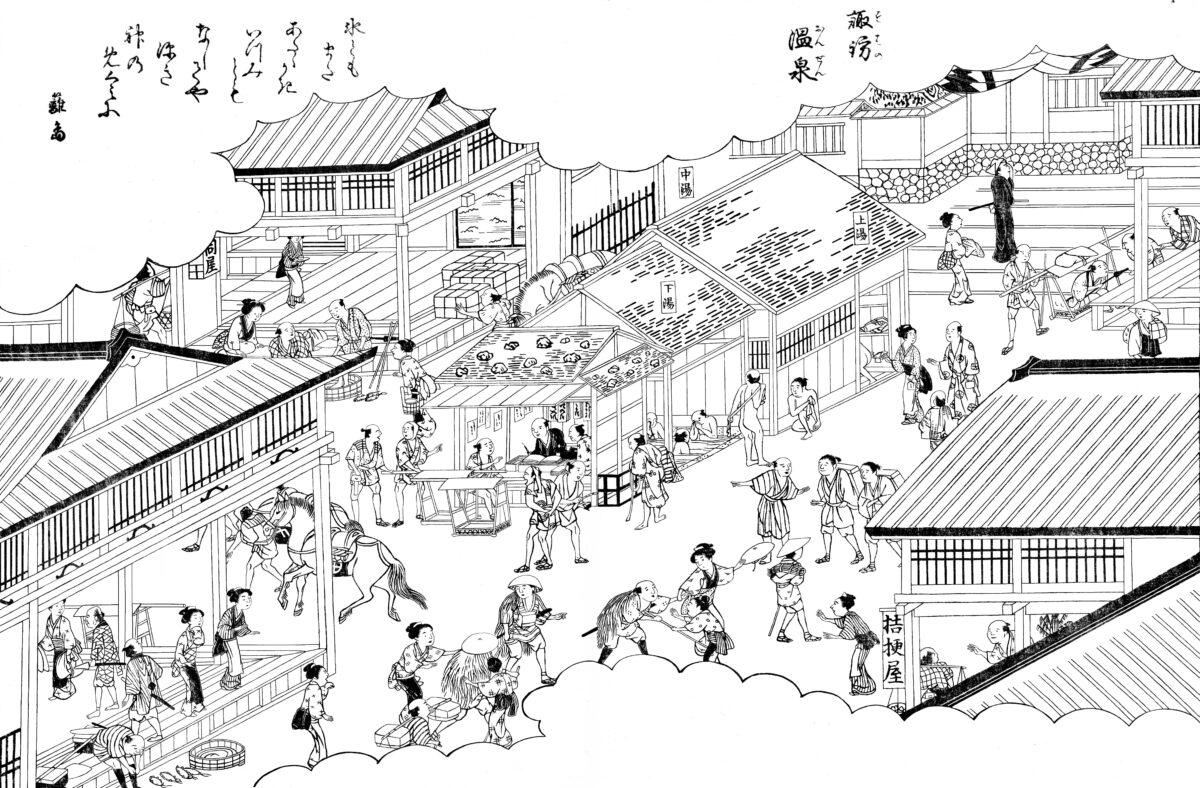 People actually began living in Shimosuwa nearly 20,000 years ago. The Wada Pass area was well-known as an area boasting obsidian, which was an excellent material for stoneware. One of the precious historic sites for obsidian mines is the Hoshigato Ruins. Obsidian from the Wada Pass area was circulated widely from the Stone Age through the Jomon Period, and even into the early Yayoi Period. Shimosuwa’s origins lie in these black stones. 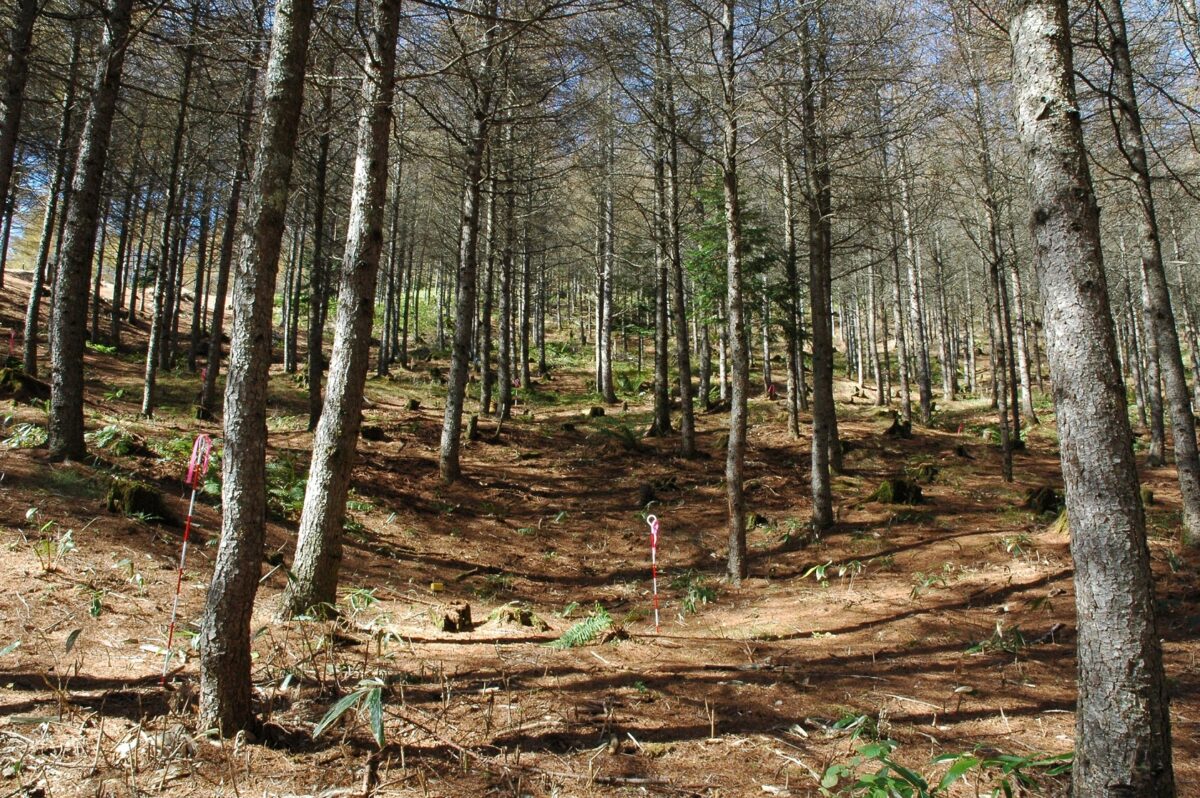 Despite this, the Suwa region’s presence began to fade upon the arrival of iron tools and the diminished use of obsidian. The Aozuka Kofun (a type of keyhole-shaped burial mound), constructed in the second half of the sixth century, is the only kofun in the Suwa area. This burial mound indicates that someone of great power or influence lived in the region. For the first time in Suwa’s history, powerful leaders who could handle horses arrived, and their presence is almost surely related to the establishment of the Suwa Taisha (Suwa Grand Shrine), which was called Suwa Jinja (shrine) or Suwa Daimyojin until the Edo Period. 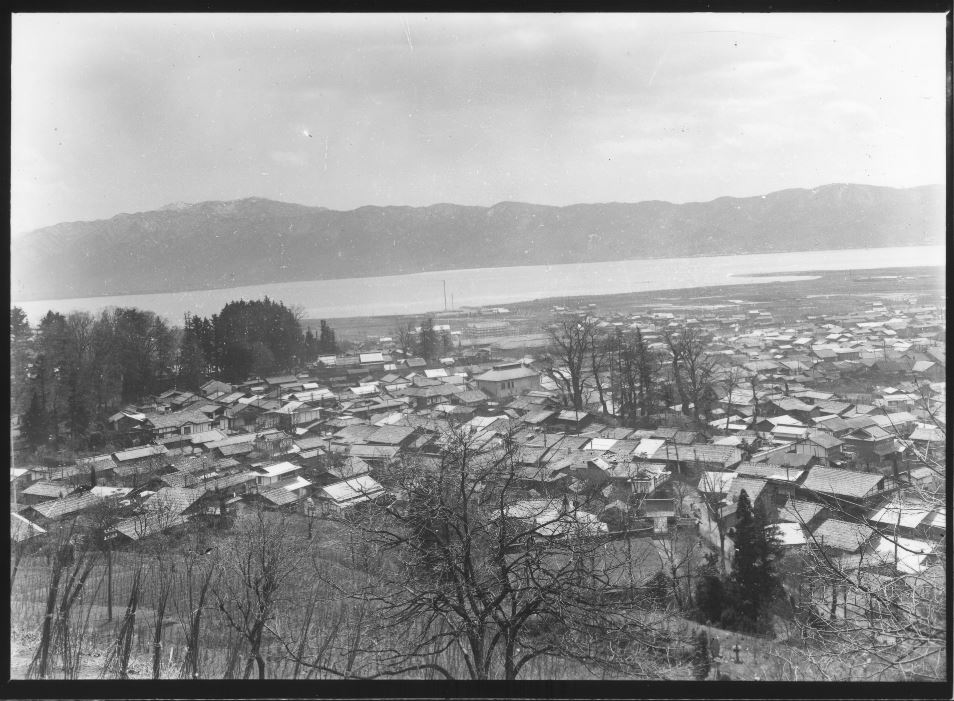 The inhabitants of the Suwa area contributed to the Yamato clan that was in the process of conquering eastern Japan at the time. These contributions most likely led to the gods of the Suwa region reaching the pinnacle of their worship from the end of the Nara Period (710-794) to the beginning of the Heian Period (794-1185). The Kanasashi clan, using Shimosha Shrines as their base, left their mark on history by contributing to the Genpei War, during which Yoshinaka Kiso helped conscript soldiers for Yoritomo Minamoto, eventually leading to the creation of the Kamakura Shogunate. 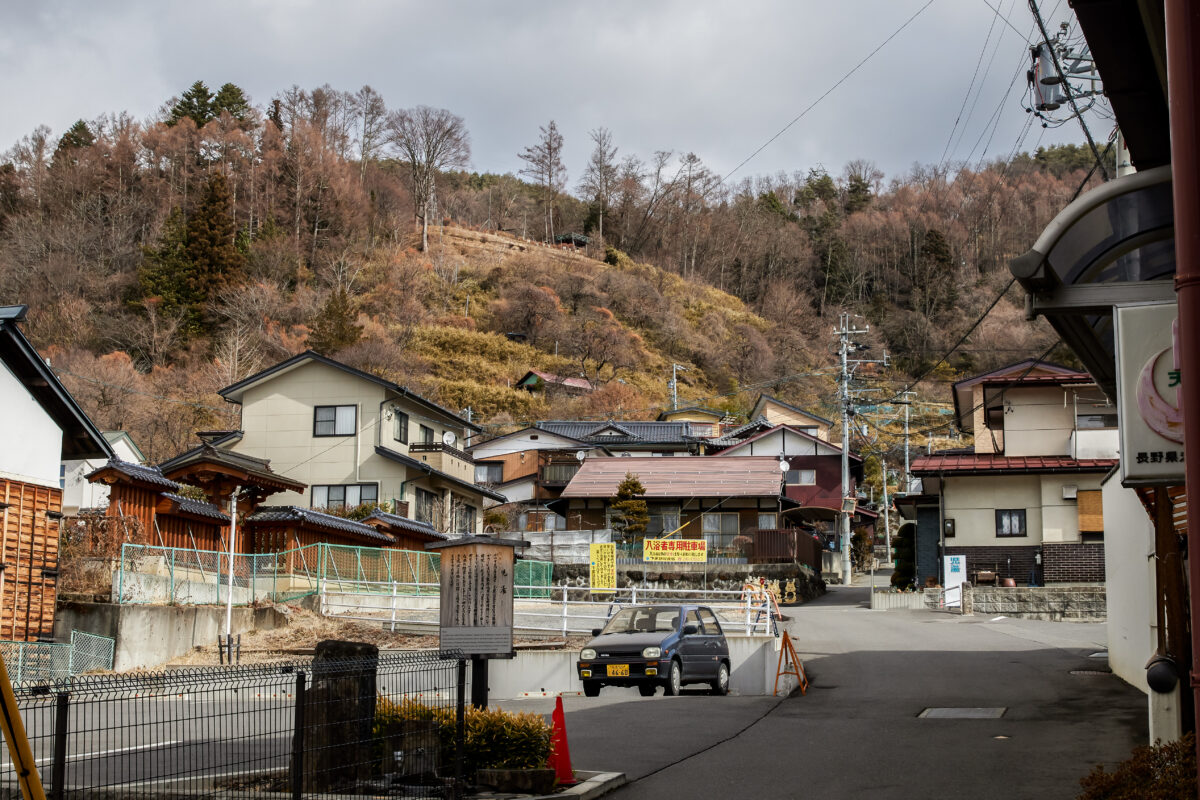 Although the relationship between Kamisha and Shimosha Shrines at the time remains unclear, the Suwa forces were closely linked with the Hojo clan who were the regents of the Kamakura Shogunate. At the Misayama sai Festival, a martial arts competition in which samurai from eastern Japan competed, Suwa’s warriors performed Shinto rituals and increased the influence of their gods. At some point, the clans in Suwa were separated by name: the clan in Kamisha was called Suwa, while the clan in Shimosha was known as Kanasashi. Some temples and ruins in Shimosuwa’s still conveys the power of the Kanasashi clan to this day.

Gradually, the authority of the Kamakura Shogunate weakened. When the Shogunate finally collapsed, the Suwa forces that supported the Hojo clan revolted and occupied Kamakura. However, they were soon defeated by Takauji Ashikaga from the Ashikaga clan, who then went on to become shogun. Thus began the Muromachi Shogunate.

Although the Suwa forces were now considered rebels, the efforts of a clan based in Kyoto helped preserve Suwa shrine’s influence throughout the Muromachi Period. However, conflict between Kamisha and Shimosha grew fierce amid the fighting between the northern and southern imperial courts and throughout the Sengoku Period. Ultimately, the Kanasashi clan was wiped out by the Suwa clan, who would then come to be subjugated by the Takeda clan. Despite this, Shingen Takeda was a devout follower of the Suwa gods and left his successor, Katsuyori (who also had Suwa blood), the reigns of the family and helped restore the devastated Suwa shrines.

The wars of the Sengoku Period continued to rage. After Shingen Takeda’s death, the Oda clan defeated the Takeda clan and took control of Suwa. Immediately after that, however, Nobunaga Oda was killed at Honnoji Temple. The Suwa clan went along with Ieyasu Tokugawa to finally bring peace to the region. 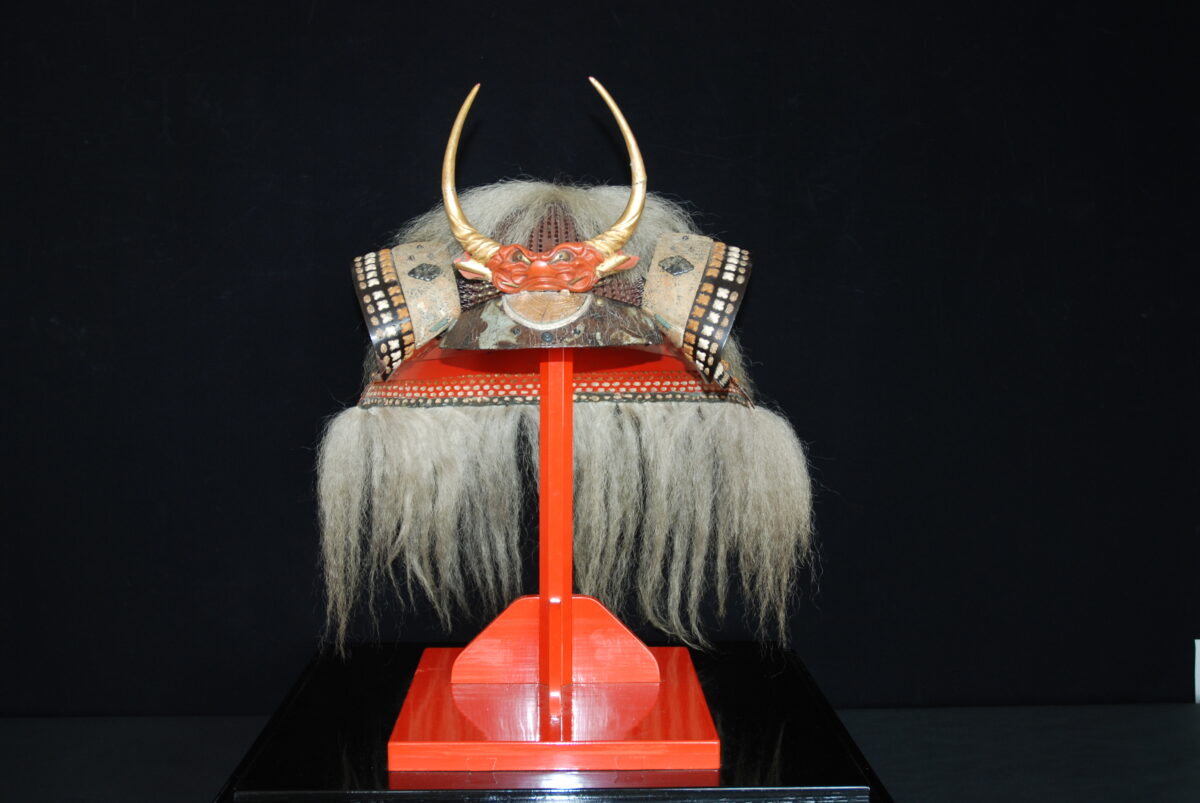 The Edo Period ushered in a centralized feudal political system known as the Bakuhan system. At this time, Suwa was reborn as Takashima Domain, while a post station (a type of rest stop for travelers) was established in Shimosuwa due to its valuable position along the Nakasendo Highway, one of the five major highways of the time. Shimosuwa’s location between the end of the Koshu Kaido Highway and the difficult-to-traverse Wada Pass could even be called a terminal or intersection of sorts. The region’s prehistoric beginnings as a hub for obsidian trade made this newest connection seem almost inevitable. 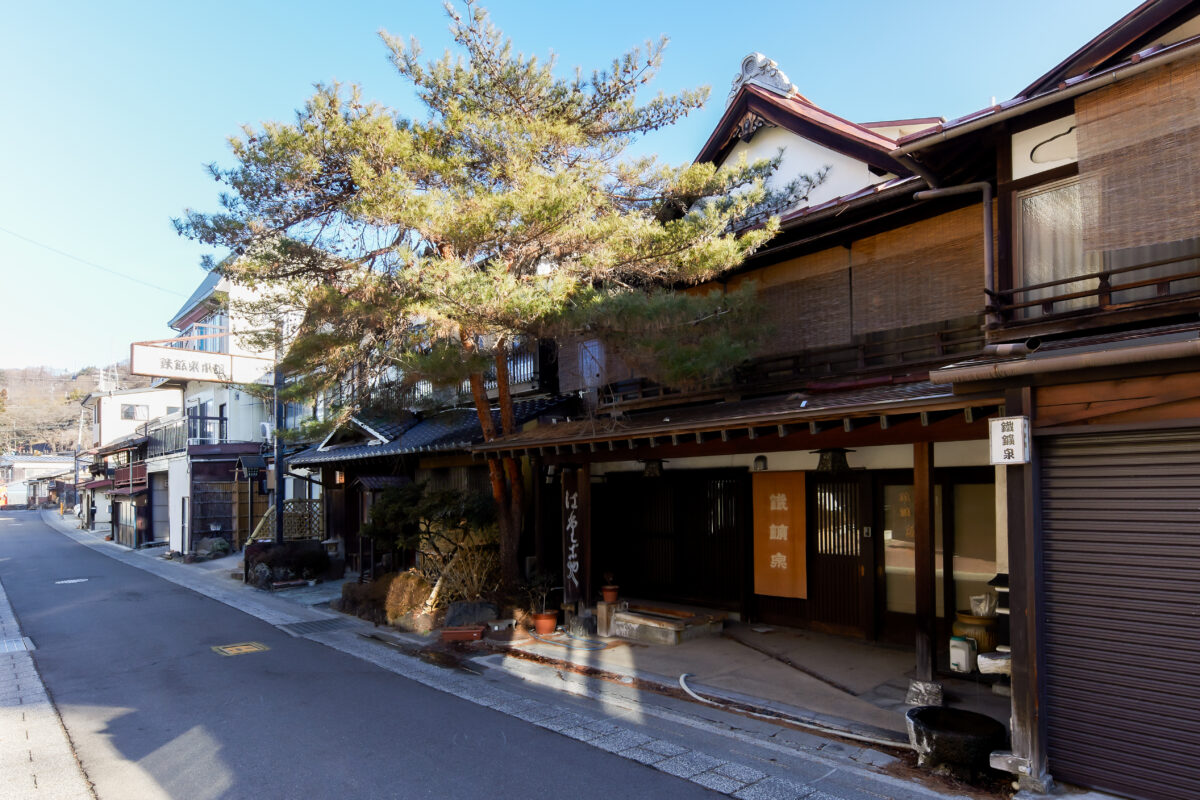 The Takashima Domain’s territory was measured at 30,000 goku. Koku was a rice-based unit of measurement used at the time to determine a region’s land value. Despite the relative lack of agricultural land for the small Takashima Domain, its location served as a hub of transportation and it flourished as a post town through commerce, industry, and distribution. The commoners of Japan began to have more leisure time in the latter half of the Edo Period, and it soon became important to maintain the existence of sightseeing spots such as Suwa Taisha, Shimosuwa Hot Springs, and Lake Suwa. From this commitment to sightseeing came a group of masters of shrine and temple architecture in Central Japan known as Oosumi-ryu and Tatekawa-ryu styles. Harumiya and Akimiya Shrines, respectively, serve as their most recognizable works.

At this time, the foundation of a silk industry that prospered greatly in modern times was also laid. 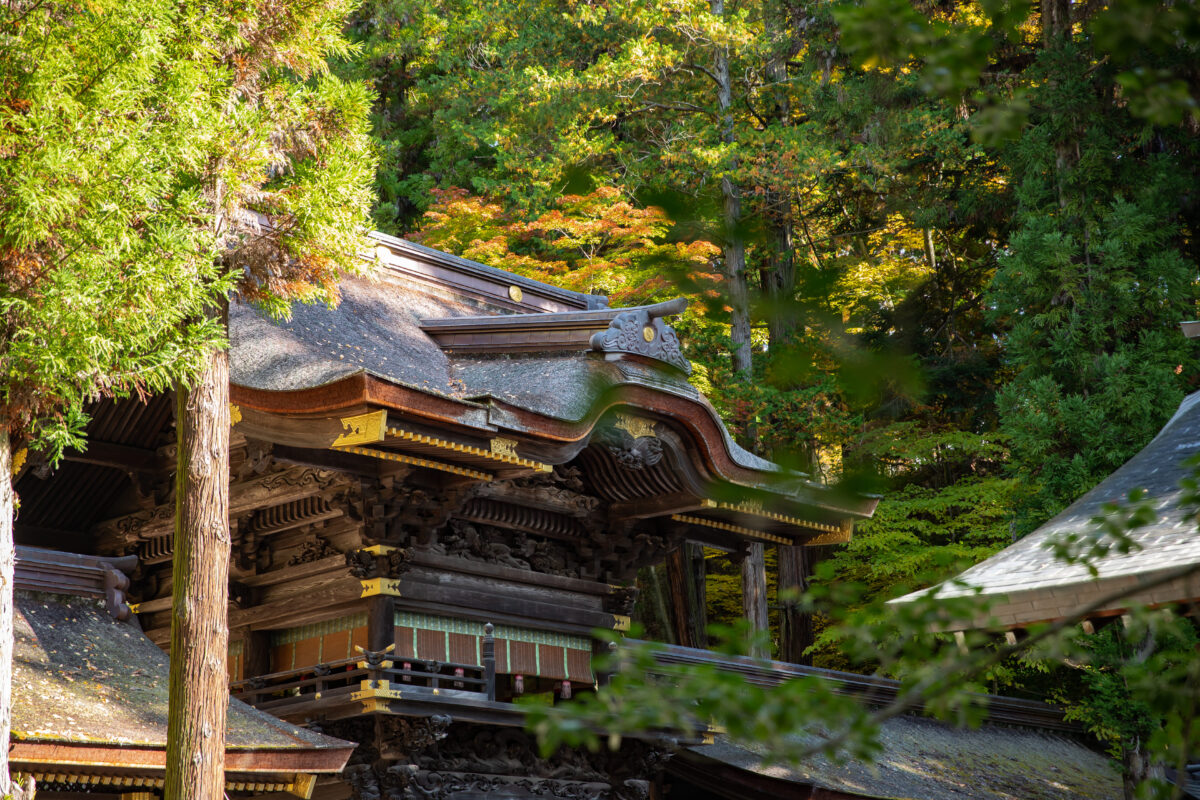 Suwa was not spared from the upheaval of the Meiji Restoration. The Sekihotai incident is one of the region’s more memorable cases. The Sekihotai was primarily made of farmers and merchants who wanted changes in tax enforcement. As they made their way up the Tosando Highway to spread word of the new government’s military, the political situation drastically changed, and they were executed in Shimosuwa. The Sakigake-zuka monument still stands in the town today.

Suwa is a region that prospered in industry. The Katakura family was the first to adopt Western silk-making techniques and modernized the area’s silk industry. It is said that many women from local regions came to the Suwa area for work, while the shopping streets were crowded with young women on holidays. Though it is difficult to imagine now, both Shimosuwa and Okaya were busy, bustling cities in those days. The abundant Taisho-style architecture, confectioners and beauty salons that remain in the area today were inherited from the region’s past prosperity.

The Great Depression brought with it the decline of Suwa’s silk industry. Still, the area’s abundant water, dry air, and other environmental resources served as the basis for industry, and these resources were eventually passed onto the precision manufacturing industry. SEIKO, Olympus, Yashica, CHINON and SANKYO are just some of the many companies that were founded in Suwa. The Suwa people’s resilience and ability to adapt throughout the changes of history have undoubtedly contributed to their success. 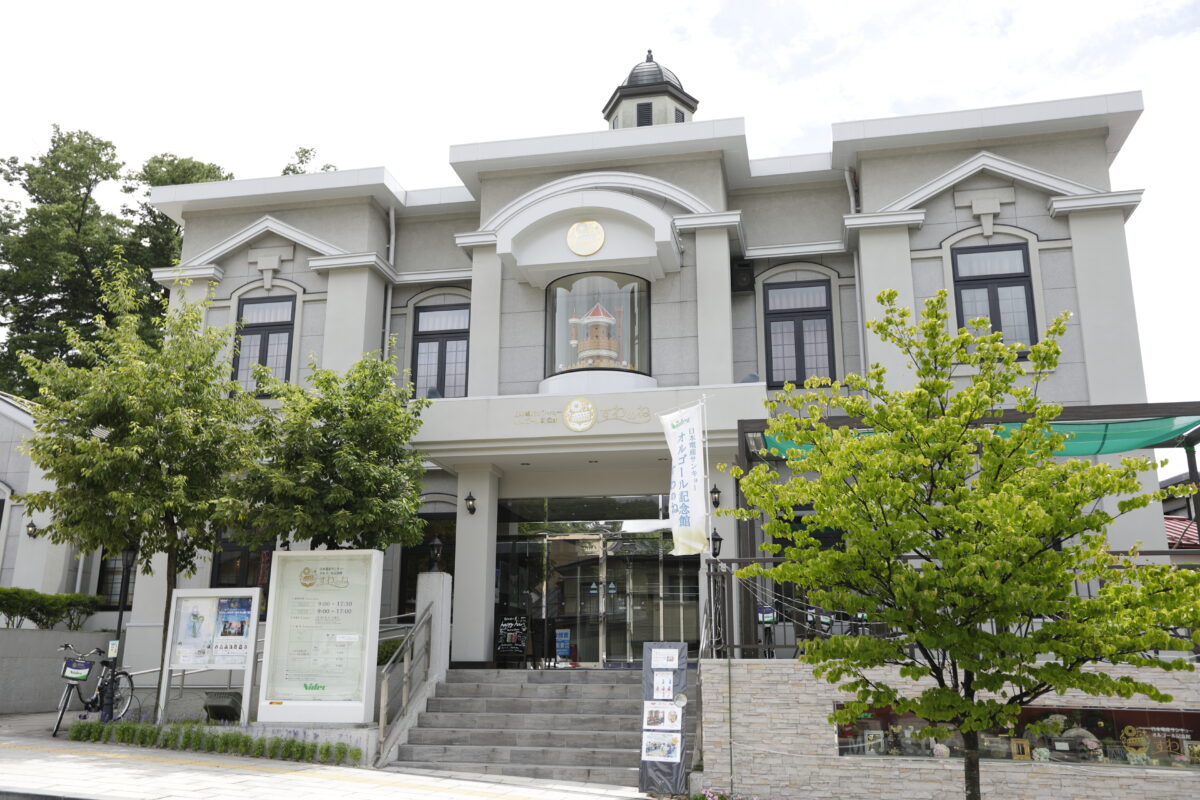 In an era of increasing urbanization as more Japanese flock to cities, Suwa is also looking to take its next steps into the future. First, we will preserve our precious heritage that remains from our long history and welcome all of you with open arms.

Contributor: Michiho ISHINO
Michiho ISHINO is a freelance writer and the secretary general of Suwa-animism who lives in Shimosuwa. He moved to Tokyo for schooling and then worked as a video game writer before returning home. He is also the founder of Suwa-animism, a volunteer research group that focuses on local history, folklore, archaeology, religious history, supporting the arts, and more.