The Seven Mysteries of Shimosha 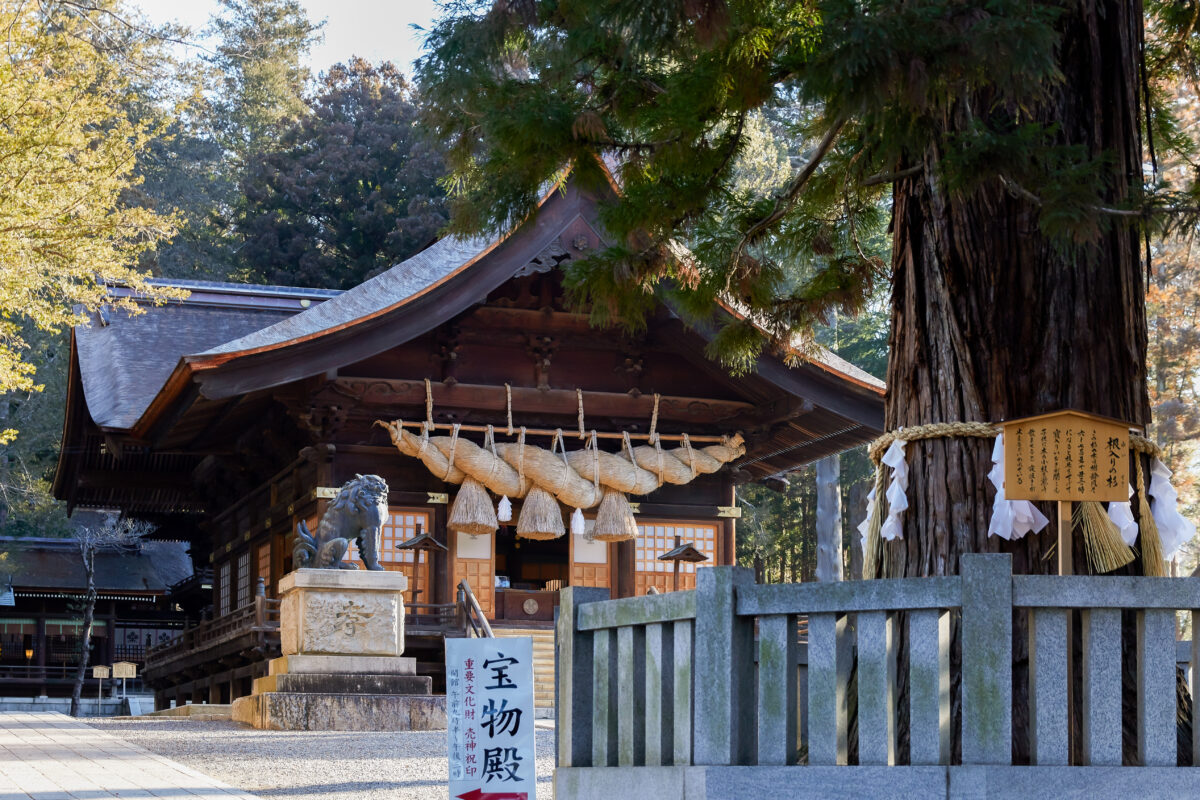 Visitors can behold the “Neiri no Sugi” (sleeping cedar) tree that faces and towers over the premises of Akimiya Shrine. This cedar is estimated to be between 600 and 800 years old, nearly 35 meters in height, and boasts a massive 5.3-meter circumference.

Late into the night (from 2 to 2:30 a.m.), it is said that the tree falls asleep by lowering its branches nearly 3 inches and that you can even hear snoring by pressing your ear to its trunk. The tree’s name may stem from people believing the tree took a moment to rest in the evening and let its massive branches and leaves down after growing tired from holding them up all day long. One’s imagination cannot help being stirred by the massive tree’s silhouette in the eeriness of the night.

Other legends surrounding the tree also exist. One legend claims that children will stop crying at night when made to drink the boiled leaves that fall from the tree, while another legend maintains that the tree produces a growl whenever the nation finds itself in trouble.

Misakuda’s Rice Sprouts
Rice can be grown start to finish in just a month!? 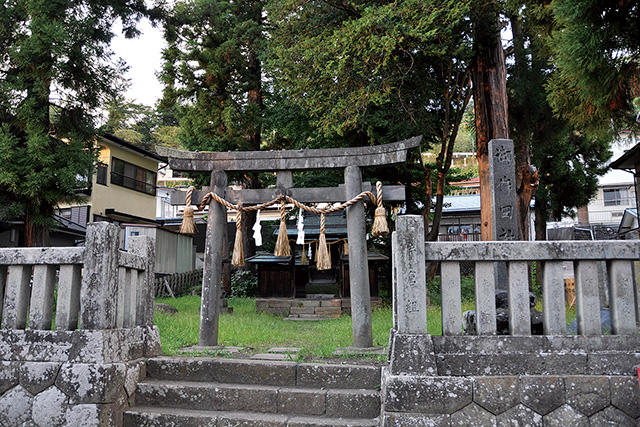 Misakuda Shrine is a small, old shrine located along the Nakasendo Highway, just in the middle of the route that connects Harumiya and Akimiya. It is said that rice planted here at the end of June would be ready be for harvest as early as August 1st.

Rice seedlings are still planted here during an annual festival held on June 30, and the seedlings sown at Misakuda Shrine really can be harvested sooner than those grown in other fields although it takes more than a month in reality. Speculation and rumors claim that local hot spring water or geothermal heat is responsible for this phenomenon, but none of these ideas have been scientifically confirmed.

Tsutsugayu Shinji
Cooking azuki beans all through the night!? 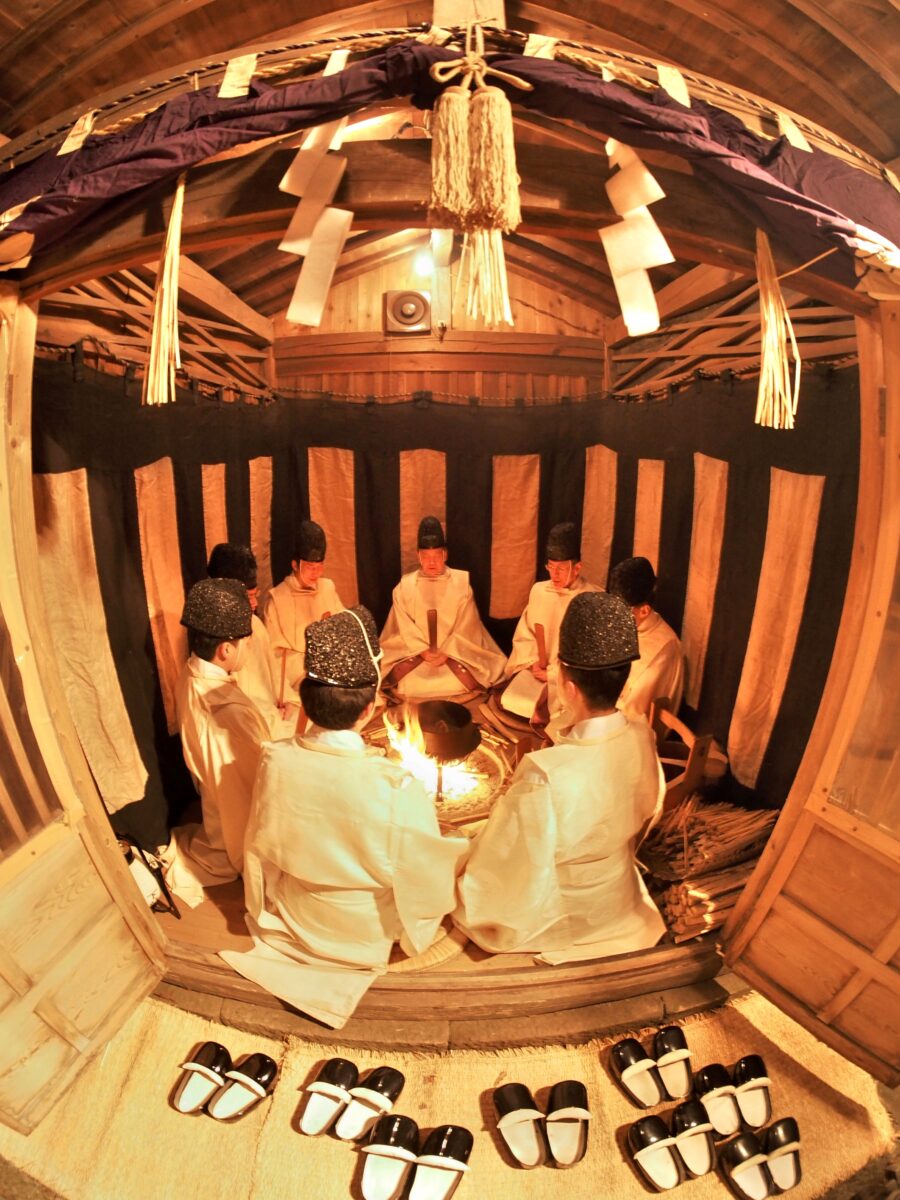 The Tsutsugayu Shiniji Shinto ritual forecasts the coming year’s harvest and is typical of those festivals dedicated to agricultural deities. Although similar rituals continue to take place at shrines throughout Japan, Harumiya’s festival is famous for its priests who light fires according to ancient customs and work throughout the night in their traditional costumes.

This Shinto ritual is held at Harumiya Shrine’s Tsutsugayuden every year from the evening of January 14 to the morning of January 15. The stems of 44 reed tubes along with rice and azuki beans are placed into a cauldron and boiled throughout the night.
Each of these 44 tubes represents a crop, and that crop’s quality for the year and the fortune in general is said to be predicted via the amount of the rice and bean mixture that has entered the tube by the morning.

At 5 a.m., the reeds are moved to the Heihaiden where the results of the divination are read for each crop, such as summer radishes and soba.

Those wishing to visit this old-fashioned festival will have to battle the cold since it is only held at this time of year. Still, the cold is not so bad when compared to the cold the priests, who are working all night long, must endure. 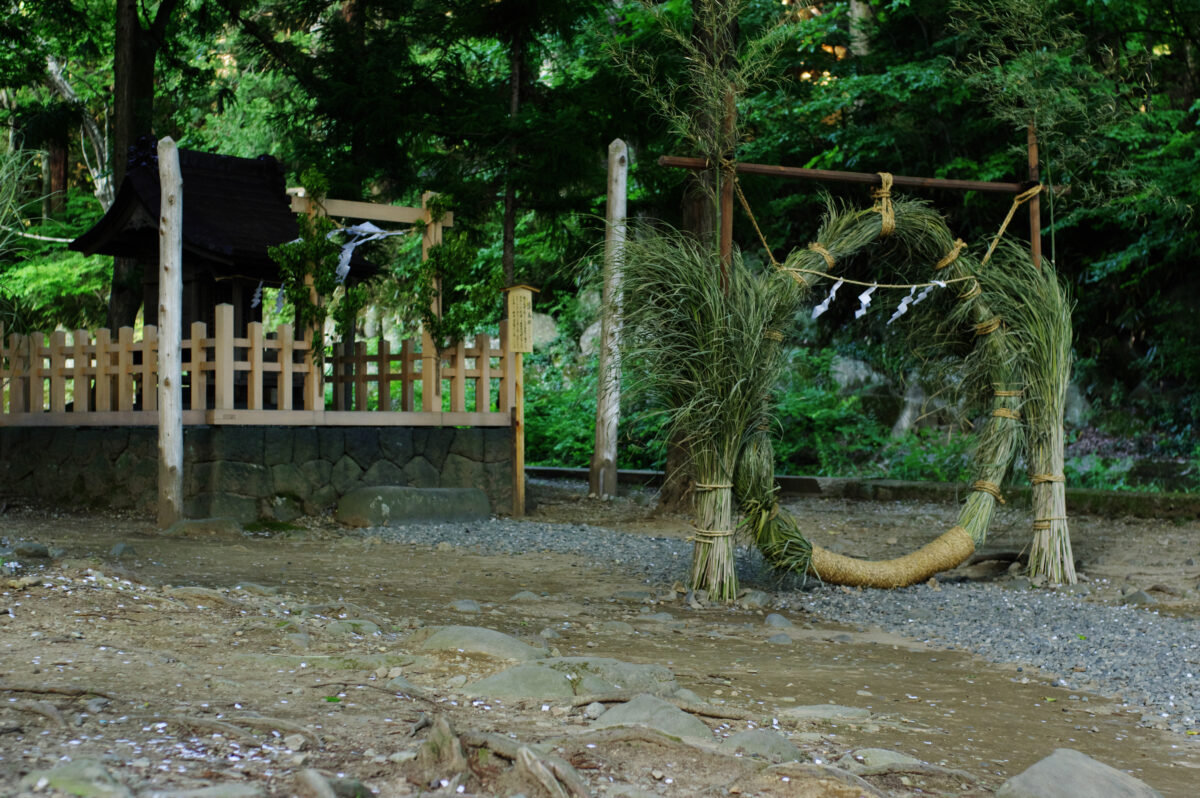 The Togawa River that runs next to Harumiya Shrine is the largest river on the northern shore of Lake Suwa and has been flooded countless times throughout its history. Ukishima (lit. ‘floating island’) sits in the middle of the river and has never been washed away by any flood, no matter how great the volume of water. This quality, along with the fact that the island seems to float when surrounded by floodwater, is the origin of its name.

Currently, Ukishima is reinforced by stone walls. It may not immediately occur to people that this “unsubmergable” island could have been unstable in the past.

Ukishima shrine, where Haraedo Okami is enshrined, can be found on Ukishima Island. After the Misakuda Festival, another event is held on June 30 of every year and people duck under a ring made of thatch built at the riverside on the island to pray for safety in the summer.

The Pure Wata no Yu Sprout
Hot spring water gets cloudy when touched by something impure!? 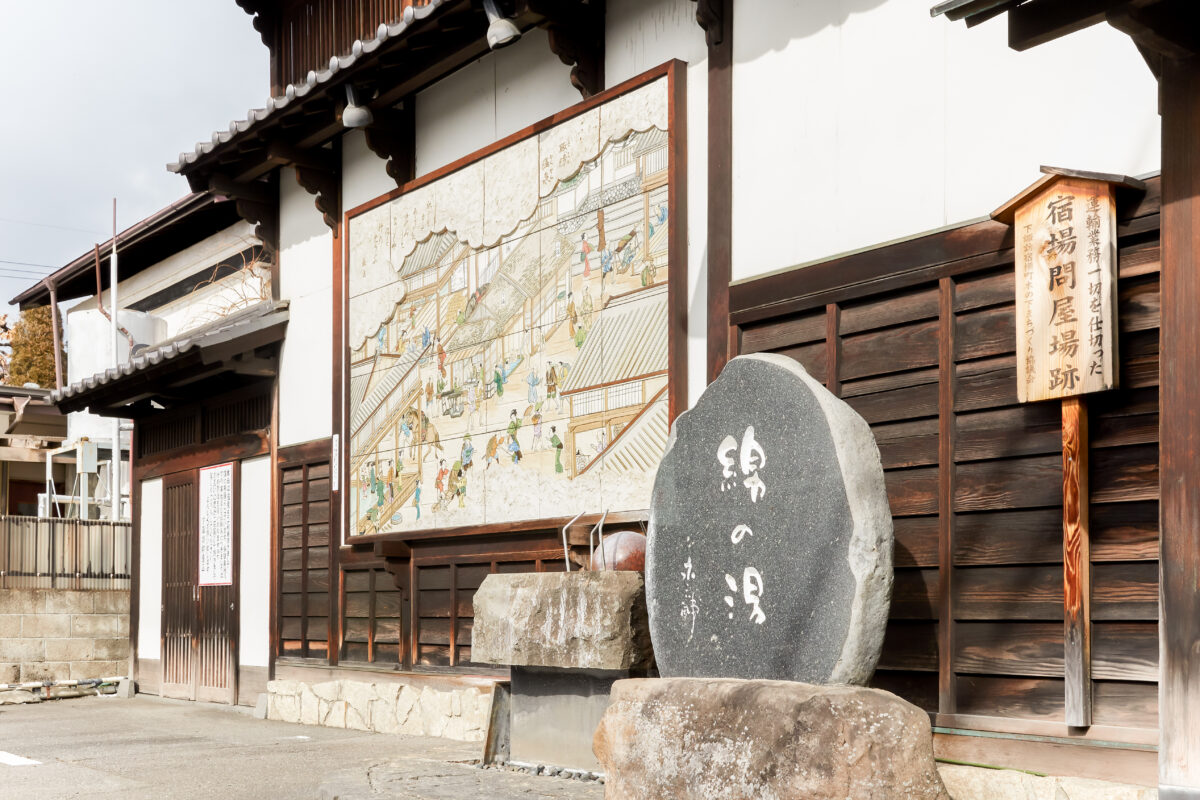 This cotton was finally set down at Shimosha, and a hot spring vigorously bubbled up from the ground there. This hot spring came to be known as Wata no Yu, and the hot spring water there is said to be sacred water belonging to a shrine. Anyone who is impure that enters the spring makes the water cloudy, and such people’s bathing was not allowed.

With the development of highways in the Edo Period, Wata no Yu became quite a popular hot spring and was soon known throughout the country. Although the source of the hot spring is not quite as vigorous as it used to be, part of the water used in the hot springs at the nearby inns and communal baths are sourced from Wata no Yu. You may find yourself going to Koyu every day. If the water turns a bit brown, don’t worry! It doesn’t mean you’re an impure person. Rather, one of the joys of hot springs is that the appearance of the water changes from time to time.

Omiwatari
A path of love on a frozen lake taken by a god to see his goddess!? 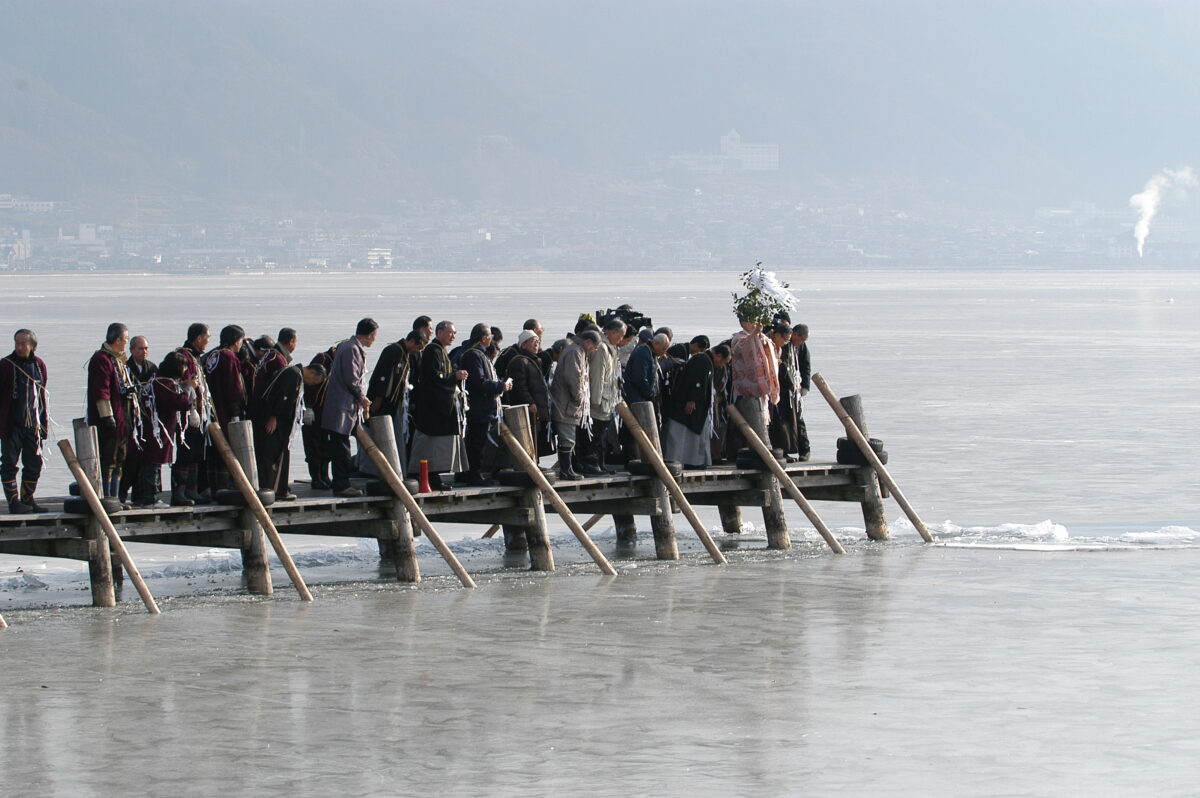 Come winter, when the entirety of Lake Suwa’s surface has frozen, huge streaks of cracked ice run over the frozen lake, which look like a small range of mountains. This phenomenon is called Omiwatari. A romantic legend says that these streaks of cracked ice are formed by the god in Kamisha crossing the lake to see the goddess who lived in Shimosha, but they also served another purpose. Long ago, when politics was often conducted via divination, the directions and shapes of these streaks of ice were used to predict the country’s fortunes for the year and was extremely important for the people of the time.

While Suwa Taisha does not currently hold any festivals directly related to Omiwatari, the shrine’s miyuki*1” called miwatari*2 was found to have been written on a historical document from the period of the Northern and Southern Courts. It is also thought that Suwa Taisha having both a Kamisha and Shimosha is due to this miwatari faith. Fortunately, it is a wholly unique natural phenomenon with an impressive scale.

*1 Miyuki refers to the temporary movement of a god. The omikoshi (portable shrine) used to transport the gods is also related to this, and many old shrines hold such annual festivals.

*2 The common name is omiwatari, but miwatari is the proper name.

Hoyano no Sanko
See the sun, the moon, and the stars all at once!? 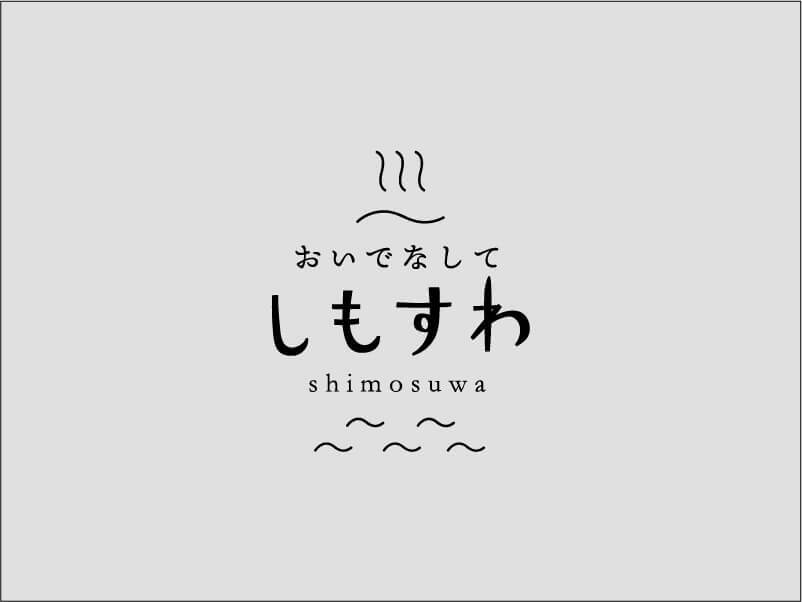 Of Suwa Taisha’s Shinto rituals held for hunting, the most important was the Misayama Festival*. It is said that people could see the sun, the moon, and the stars all at once at the very end of the festival. There are a variety of folktales about where they may be seen. Some say the sun, moon, and stars can be seen being reflected in a pond found in Shimosha Misayama Shrine, or viewed from atop of a sacred tree in Misayama near Matsubara  Suwa Shrine in Komi. It does appear that the three objects are all simultaneously visible under certain conditions such as at the break of dawn.

While seeing the sun, moon, and stars all at once is known as Sanko Shinko (a belief in three lights), its roots and history are entirely unclear. It very well could have originated from the worship of Mt. Misayama. 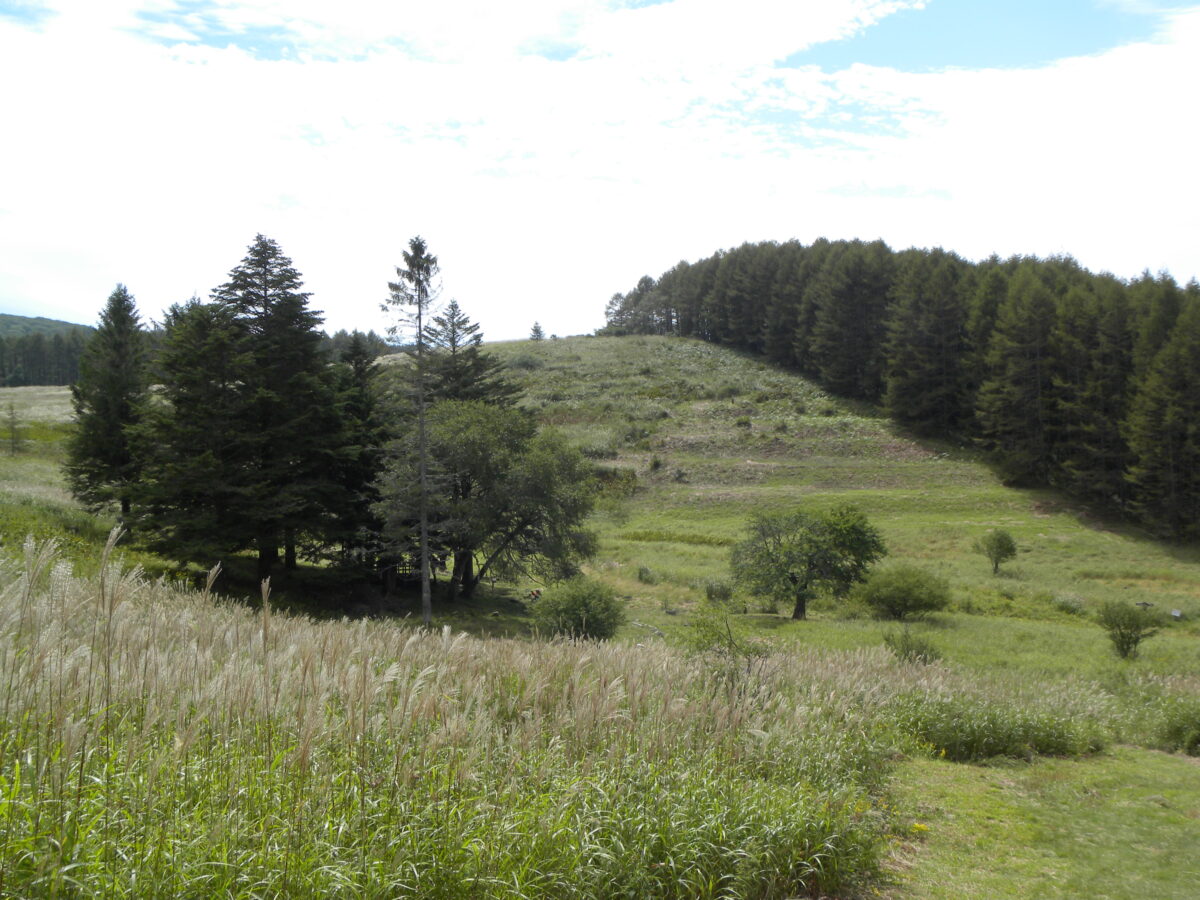 * The Misayama Festival (Hoyasai)
During the Heian and Kamakura Periods, this festival for worshipping the mountain gods was held every year from August 26 to August 28 at the current Moto-Misayama Shrine. The Mikari Shinto ritual was performed to offer up offerings of the hunt to the gods, and a variety of competitions such as horseback archery and dog chasing were held. Performance dedications, such as sumo wrestling, were also held. If it could be compared to anything in the modern world, it would be similar to a martial arts camp/festival. Traces of the festival have been found on Mt. Kirigamine dating up to the early Edo Period. These days, Misayama Shrine has been relocated to the side of the Shimosuwa forest road, and the festival is now mostly used to pray for the health of 2-year-old children.