Column: The Mysteries of Shimosha 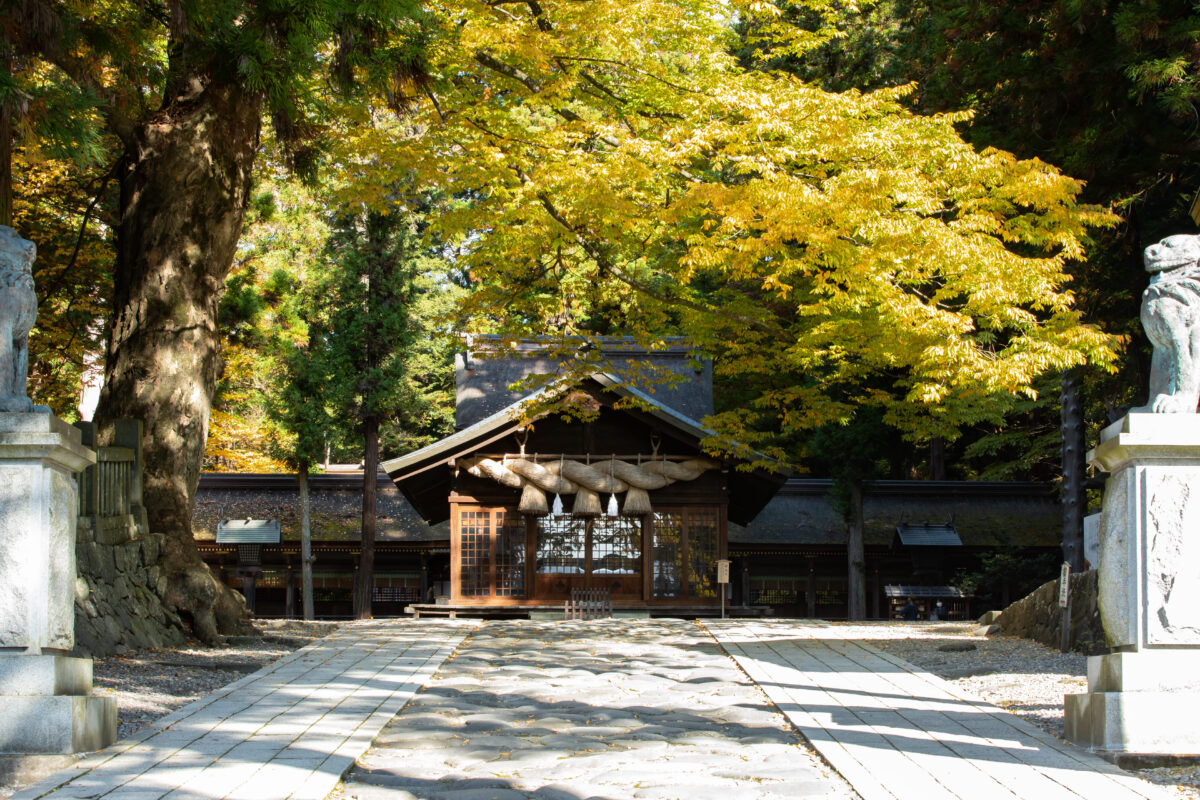 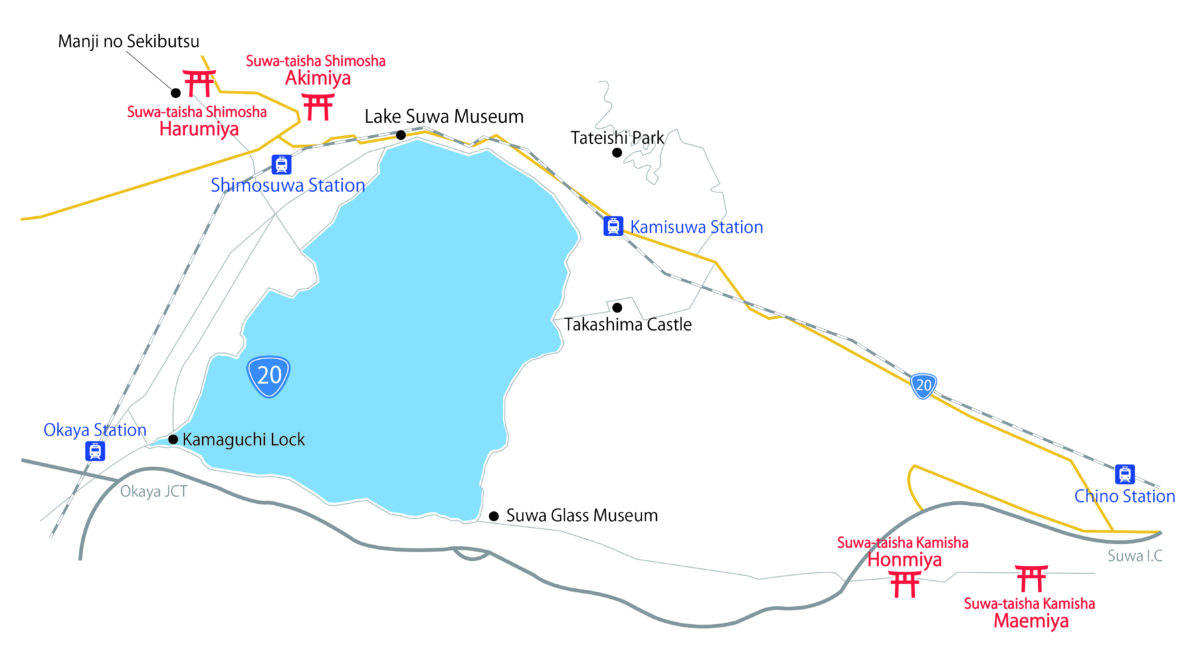 While there is no simple answer regarding the origins of the shrine’s location, one explanation is the Omiwatari phenomenon that runs across Lake Suwa between the shrines of Kamisha to the south and Shimosha to the north. An ancient legend describes Omiwatari as Kamisha’s god crossing the lake to visit Shimosha’s goddess. An event called miyuki or senza celebrates the relocation of the gods, and Omiwatari was described as miyuki in the record of Suwa Taisha in the period of the Northern and Southern courts (1337-1392). Since the Muromachi period (1336-1573), Yatsurugi Shrine in Suwa City has been responsible for observing Omiwatari and conveying the result to the gods. Such tasks may have been formal Shinto rituals of the Suwa Taisha itself at some time. This could be the reason as to why the shrines of Suwa Taisha are located on the northern and southern ends of Lake Suwa. 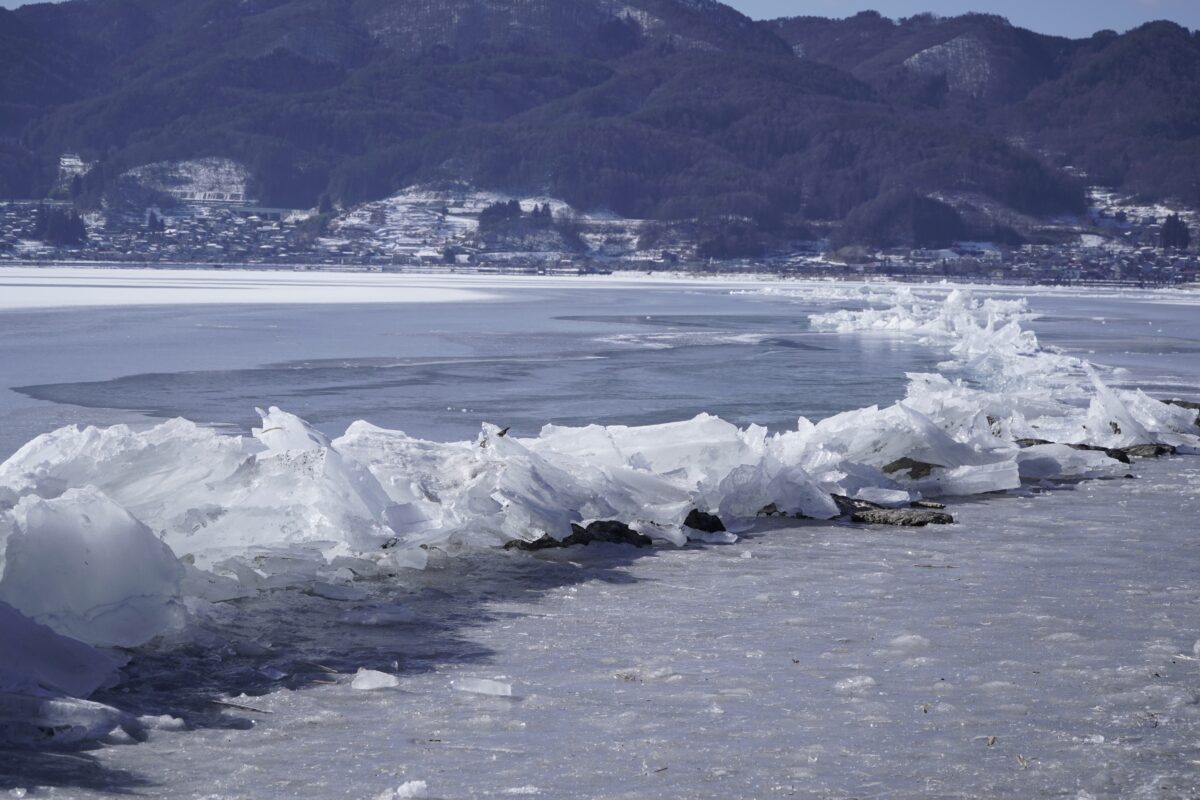 Stranger still is that, Kamisha and Shimosha have respective special festivals dedicated to the relocation of the gods. In Kamisha  this relocation festival is known as Ontosai. Shimosha, meanwhile, has two festivals throughout the year for this relocation. On the first of February, the god is moved from Akimiya to Harumiya, while on the first of August the god is moved from Harumiya to Akimiya. This festival, known as Ofune Matsuri, features a procession centered around a portable shrine, with the event in August bringing a particular amount of fanfare as residents band together and use their bravery and might to pull this portable shrine through the town. Witnessing this will certainly make visitors appreciate Suwa’s festivals other than Onbashira. 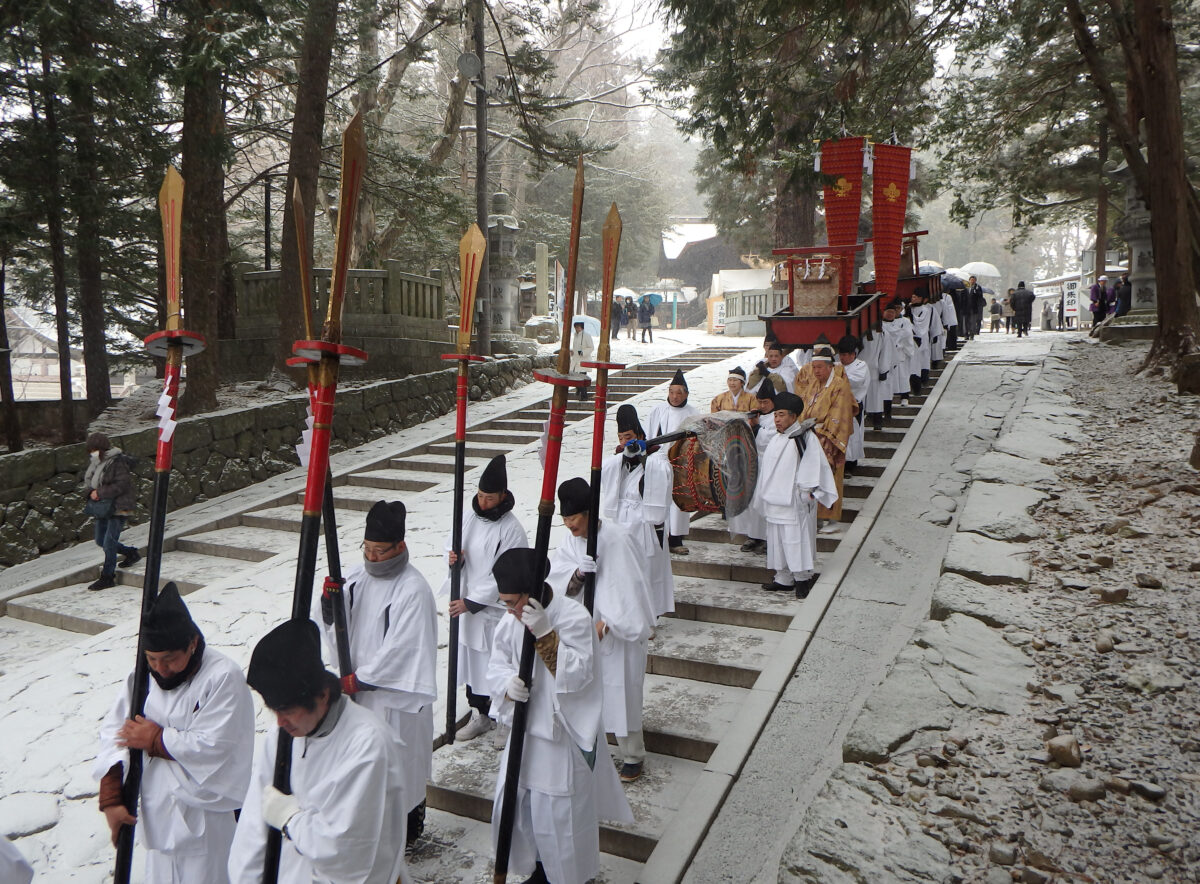 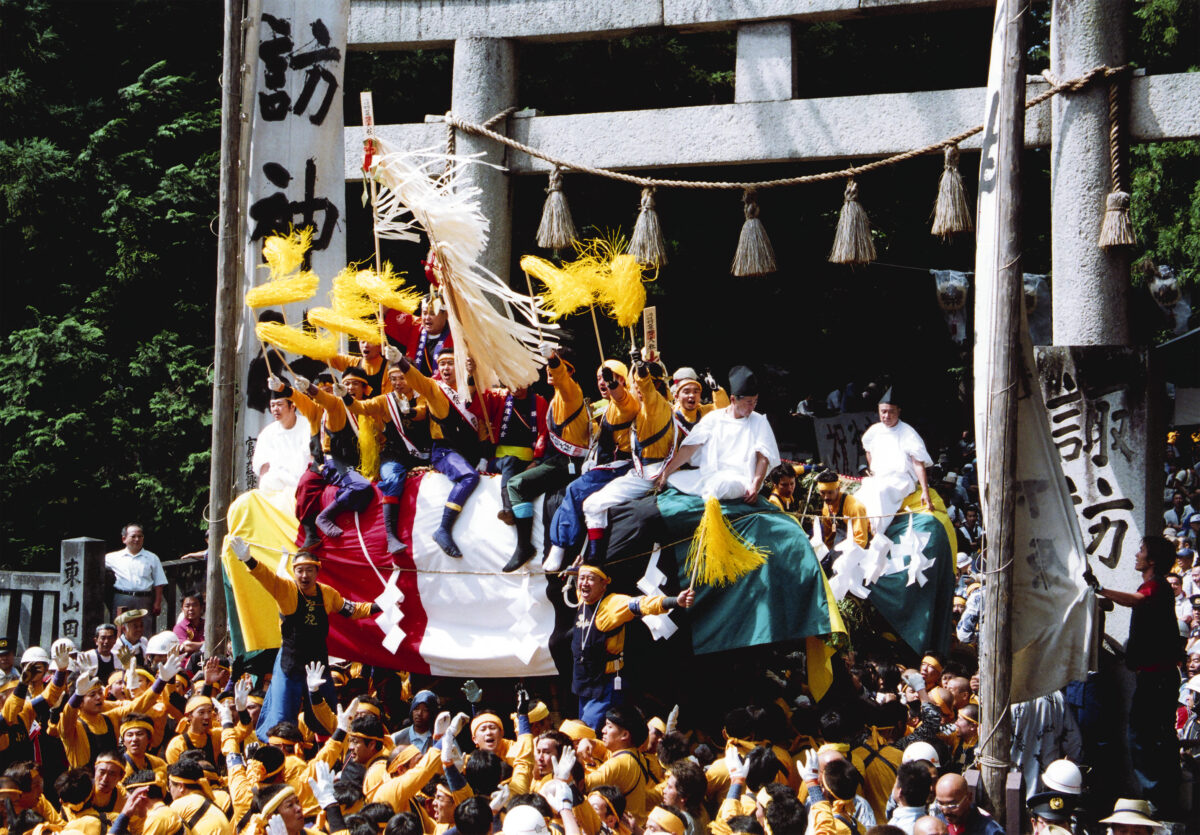 Regarding the relocations in spring and autumn, it is said that the god descends the mountain to the human community in spring, while the god gives blessings and returns to the mountain in autumn. Nevertheless, one of the unique features of Harumiya, the spring shrine, is that it is not actually located in the mountains. Furthermore, the Misayama sai Festival, an Olympic-like martial arts festival for samurai warriors in eastern Japan in the Middle Ages, was held in the elevated recesses of the mountains that stand far above all four shrines. This Misayama, could also be thought of as a mountain shrine which may have changed location throughout the years. While the Misayama Festival is still held today as an autumn festival to pray for the health of three-year-old children, what sort of religion or events it celebrated in ancient times remains shrouded in mystery. 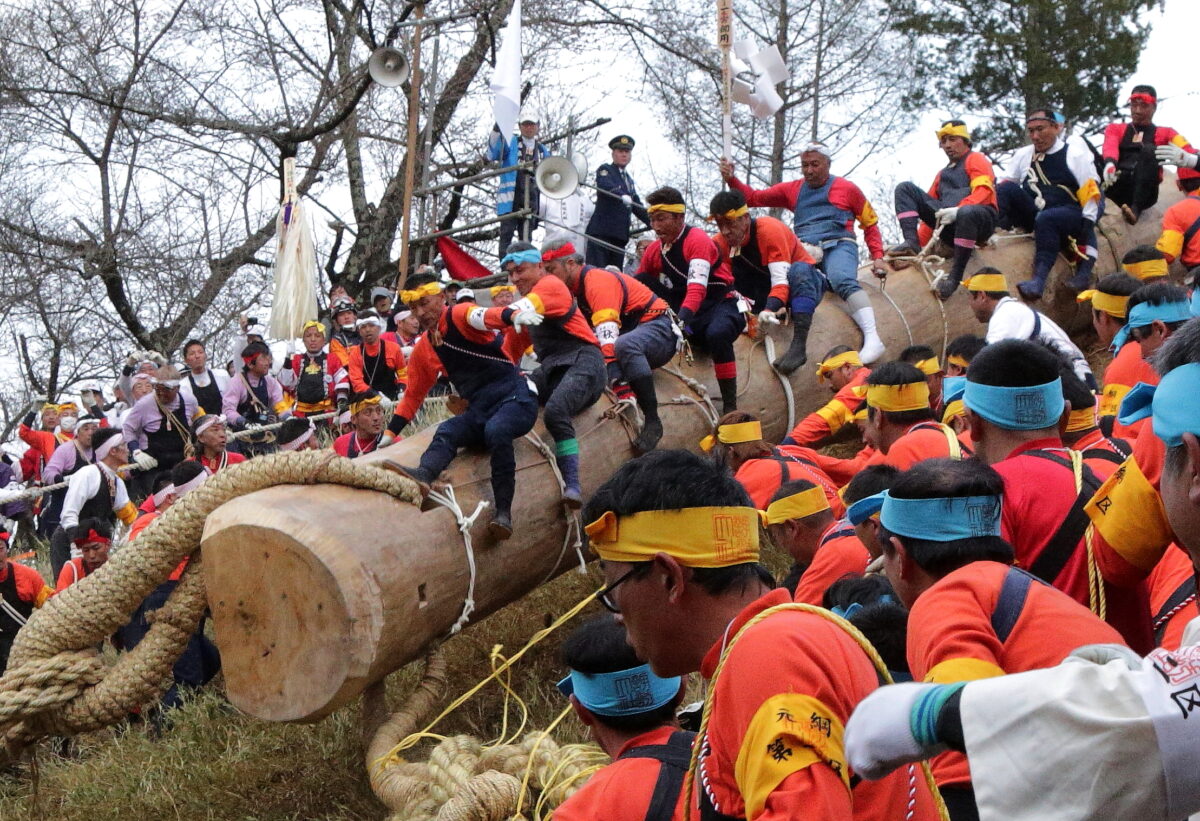 Mysteries abound to this day at the ancient and large Suwa Taisha. Adding to the mystery is that, due to conflicts throughout the ages, very few of the older documents remain in Shimosha. The Onbashira Festival is another mystery. While Kiotoshi (felling of trees and log-riding) at Shimosha is well-known throughout Japan, Kiotoshi itself is not actually a Shinto ritual. Rebuilding the gohoden, the building in the shrines where the god resides, is the festival’s main purpose. However, such ancient, mysterious rituals remain generally unknown.

When visiting the ever-mysterious shrines at Suwa Taisha Shimosha, we ask that you take special care while observing the premises.

Michiho ISHINO is a freelance writer and the secretary general of Suwa-animism who lives in Shimosuwa. He moved to Tokyo for schooling and then worked as a video game writer before returning home. He is also the founder of Suwa-animism, a volunteer research group that focuses on local history, folklore, archaeology, religious history, supporting the arts, and more.